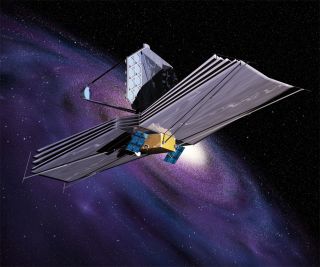 The James Webb Space Telescope, a successor to the Hubble Space Telescope, is a stated priority of Canadian government astronomy funding. Other projects, astronomers say, are threatened by budget cuts.
(Image: © ESA)

Canadian astronomy receives funding principally from three government departments: the Canadian Space Agency (CSA), the Natural Sciences and Engineering Research Council, and the National Research Council (not to be confused with the U.S. entity of the same name.)

Money is tight these days in the Canadian government, however. Officials with the ruling Conservative party have said they are conscious of the federal budget deficit and must make cuts. Critics, however, argue that fundamental research is coming under attack.

In May, Tory officials said they would change the NRC's mandate to "invest in large-scale research projects that are directed by and for Canadian business."

In response, the Canadian Association of University Teachers called the change "short-sighted, misguided and unbalanced" because it would jeopardize the resources of universities that rely on NRC labs to perform research. Other researchers cried foul in the media.

Meanwhile, the CSA's budget for space exploration, which includes astronomy, will fall in coming years, according to the latest figures released by the agency in mid-2012.

The top goal of SSEP was, according to the CSA website, "to maximize the scientific return to Canada by providing funding to space science projects and activities in the areas of initial instrument studies, data analysis and other space science-related academic studies."

René Doyon, a University of Montreal researcher who is principal investigator of a near-infrared spectrograph instrument on James Webb, said he sees the telescope as a worthy investment for Canada.

Among the many scientific discoveries it should enable, astronomers are hoping it reveals the atmospheres of alien planets. By contributing 5 percent of the total cost of the observatory, Canada gains an according amount of telescope time for its participating astronomers. "It will open up new capabilities," Doyon said.

"We don't have examples of commercialized technology that come out of [astronomy]," Doyon added, "but to answer these big questions — where are we coming from, is there life outside of the solar system — involves pushing technology to its limit."

Although astronomy may not lead to direct technological spinoffs, McGill astronomer Vicky Kaspi (who co-authored a paper concerning an "anti-glitch" magnetar star published last month in the journal Nature) said she has seen applications in her lifetime from fundamental astronomy research.

"A lot of X-ray astronomy does beautiful images of supernova remnants and pulsar nebula," Kaspi said. "One of my Ph.D. students is in medical imaging, and [is] bringing the tools that she learned in manipulating X-ray images ... to bear on imaging tumors or different parts of the body."

"When you take a challenge, as a technological challenge, there are very interesting ways that it can be used that you wouldn't expect," Kaspi added. "A hundred years ago, if you wanted to improve the lighting in your house, would you spend money developing better candles, or would you want to put money into crazy electricity research? At the time it seemed pretty wacky, but in hindsight, it would have been the better bet."