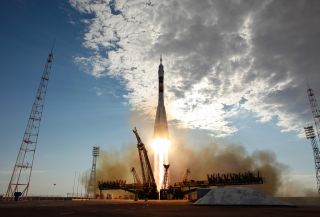 The Soyuz TMA-05M rocket launches from the Baikonur Cosmodrome in Kazakhstan on July 15, 2012.
(Image: © NASA/Carla Cioffi)

Russia, one of the world's space powerhouses, has been launching its rockets from Kazakhstan since the early days of its space program, but now plans to shift its launches to Russian soil within five years. But some experts question whether such a pace is realistic.

This spring, President Vladimir Putin pledged $51.8 billion by 2020 to place his country back in the top ranks of world space explorers. The centerpiece of that promise is Vostochny, a cosmodrome, or launch site, under construction in eastern Siberia, near the Chinese border. Within five years, Putin promised that an International Space Station crew would launch from Vostochny.

Putin's motivations could be political — there have been tensions over the years with the Baikonur Cosmodrome lease in Kazakhstan — or, observers said, a move to bring more commercial space activity into his country.

Baikonur used to be the crown jewel of Russia's manned space program. Built amid the space race between the Soviet Union and the United States, Baikonur was the spot where Sputnik soared into the sky in 1957 and became the first artificial satellite to orbit the Earth.

Four years later, humanity's first spacefarer — Yuri Gagarin — launched from the cosmodrome, leading the charge for dozens of other cosmonauts to suit up and take missions of their own into orbit.

"The Russians have a historical interest in the space program because they were leaders for a long time," Art Dula, a Houston-based space lawyer who has been in the industry for more than 30 years, told SPACE.com.

Things changed as the Soviet Union crumbled. In 1991, Kazakhstan declared independence. Russia now was forced to lease its launch facility from another country to get its own manned missions off the ground.

The latest agreement between the two countries was signed in 2004, but took six years to ratify, according to Russian news service RIA Novosti. The pact allows the Russians to use Baikonur until 2050 for an annual lease price of $115 million, in addition to $50 million in yearly maintenance for the facility.

When the space shuttle program retired in 2011, Baikonur became one of only two locations in the world where humans launch to space — making it all the more precious for the Russians, said space consultant James Oberg. (The other is in China.)

But with NASA working on its own launch vehicles and commercial tourist flights taking off as soon as 2014, that prime position will evaporate shortly, he said. [Video: Putin Plays Peace Card At New Russian Space Launch Site]

"It's a situation in which NASA will have been moving into a nondependent position vis-a-vis its own orbital transportation, which is a good thing [for the Americans]," Oberg, a former NASA space shuttle mission control engineer, told SPACE.com.

"The Russians realize this," Oberg said. "The Russians, looking at the future of their program, are very distressed."

Oberg said the Russians and Kazakhstanis came to loggerheads several times since the first lease was signed. Disagreements about rocket trajectories, and concerns about the long-term stability of the Kazakhstani government, are both spurs in the sides of Russia to seek alternatives, he said.

"For the massive investment of the new cosmodrome, I'm not seeing any practical advantages to justify it, so I suspect that these are political and diplomatic purposes; they were the main motivation," he said.

The venerable Russian Soyuz spacecraft that hauls people into orbit today will require a major overhaul to leave Earth from Vostochny, Oberg added. Baikonur is landlocked, while Vostochny is closer to the ocean.

"Just launching manned spacecraft over the ocean, for one, requires major changes in the abort modes and major hardware changes to the Soyuz [because] you're coming down on water instead of land," he said.

There could, however, be other economic factors at play. Asif Siddiqi, a Russian space analyst at Fordham University, said Russia has wanted to develop the countryside around Vostochny for decades.  "They could make it a science and technology hub," he said.

Construction started in earnest last year, but companies have hesitated to participate out of fear it will be a boondoggle, he said. Siddiqi, though, said he believed eventual completion is possible.

Vostochny, Dula added, could spur a multitrillion dollar business when it does get going. Although there will be competition from other sites for commercial launch companies, he likened the situation to the dozens of airlines worldwide that take to the skies. Competition, he said, is good.

"I believe that President Putin recognized that Russia, to stay a leader in this area, had to invest billions of dollars to upgrade their facilities," he said.

Further, economic studies undertaken by Dula's company show the nascent commercial tourism industry could provide a significant profit to those willing to support it. While human launches are a minority of the space market now, Dula sees huge potential for unmanned liftoffs shortly.

"You can't measure how many people are using a bridge by watching how many swim across the water," Dula said. "This will be a growth industry ... once there is a profit to be made in space from taking people into space, then the industry will develop very rapidly."