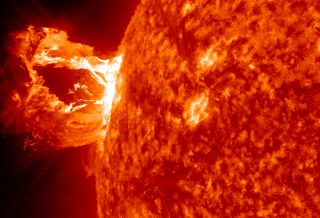 A beautiful prominence eruption shot off the east limb (left side) of the sun on Monday, April 16, 2012. This view of the flare was recorded by NASA's Solar Dynamics Observatory.
(Image: © NASA/GSFC/SDO)

A nearby star smaller than Jupiter punches far above its weight, firing off surprisingly intense flares that regularly triple its total brightness, scientists say.

The dwarf star, which lies 53 light-years from Earth, has an intrinisic brightness just 0.02 percent that of our own much larger sun. But the dwarf still manages to unleash dazzlingly bright flares comparable in energy to the most powerful solar flares that erupt from our star, a new study reports.

"It would be like the sun suddenly, in a minute, became three times brighter and then gradually faded over the next few hours," astronomer John Gizis of the University of Delaware told reporters today (June 3) at the 222nd meeting of the American Astronomical Society in Indianapolis. [The Worst Solar Storms in History]

Gizis and his team discovered the powerhouse L dwarf star, known as W1906+40, two years ago. It's just 90 percent as wide as the planet Jupiter, with a cool (for a star) average temperature of about 3,700 degrees Fahrenheit (2,038 degrees Celsius).

But observations by NASA's planet-hunting Kepler space telescope have revealed that, every week or so, W1906+40 blasts out a flare that heats the star up to 14,000 degrees Fahrenheit (7,760 degrees Celsius).

"The energy is something like, if I've calculated it correctly — something like 4 billion megatons of TNT," Gizis said. For comparison, the nuclear bomb the United States dropped on the Japanese city of Hiroshima during World War II had an explosive yield of about 13 kilotons of TNT. (There are 1,000 kilotons in a megaton.)

While the new findings have substantial gee-whiz appeal on their own, they could also help astronomers address broader questions, Gizik said.

For example, studying W1906+40's superflares could contribute to a better understanding of how flares work on stars in general and on our sun in particular. And they could shed light on the potential of dwarf-star systems to host extraterrestrial life.

"Some people have been arguing that you could put habitable planets next to L dwarfs, although personally I think it's arguably a far-fetched idea," Gizik said. "Of course, the flares are somewhat bad news for that kind of scenario, but more calculations would be needed."

The Kepler spacecraft launched in March 2009, on a mission to hunt for Earth-like exoplanets. It has been staring continuously at more than 150,000 stars, looking for tiny dips in the stars' brightness caused when planets cross their faces.

As the new study shows, astronomers have also been using Kepler's precise measurements to study the stars themselves, learning more about stellar variability and outbursts such as flares.

Last month, however, NASA officials announced that the second of Kepler's four orientation-maintaining reaction wheels had failed, robbing the spacecraft of its precise pointing ability. Mission engineers are trying to recover at least one of the failed wheels; if they cannot do so, Kepler's planet-hunting days are almost certainly over.

The new study will be published in an upcoming issue of The Astrophysical Journal.