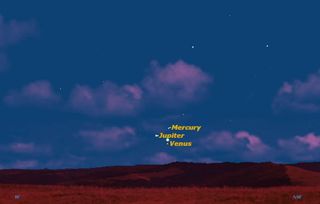 Just after sunset on Sunday May 26, the three brightest planets, Venus, Jupiter, and Mercury, will form a perfect tiny triangle in the western sky.
(Image: © Starry Night Software)

Take a look at the western sky just after sunset this week, and you’ll see an amazing sight: three bright planets in close formation.

The giant planet Jupiter is moving behind the sun, so is dropping rapidly in the western sky. Mercury and Venus, much closer to Earth, are just emerging from behind the sun, moving in the opposite direction from Jupiter. The three planets meet this week, weather permitting. Such a tight grouping of planets in the night sky won't come again until 2026.

Find yourself a location with a very low western horizon. Go there just after sunset. A small 7x50 or 10x50 binoculars will help, but don't point it in the direction of the sun until it is well below the horizon.

Venus is the brightest of the three, and so should be the first that you see, just above and to the left of the point where the sun has just set.

Once you’ve spotted Venus, look for Jupiter nearby. Jupiter will be two magnitudes fainter than Venus, magnitude –2, still extremely bright.

Finally, try to spot the third planet, Mercury, slightly fainter than Jupiter at magnitude –1. Tonight (May 22) and tomorrow night it will be just to the right of Venus, moving upward and to the left more rapidly than Venus.

Try to watch these three planets every night for the next week, and you’ll see them appear to circle around. On Sunday night (May 26) they will form a perfect equilateral triangle, two degrees on a side.

We don't often get to see three planets in such close proximity and see how rapidly they appear to move.