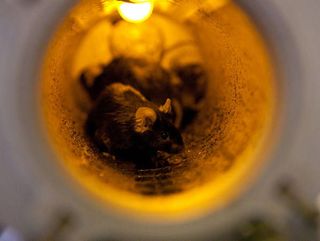 This image shows scientific equipment for studying mice, BIOS MLZH 01, to be flown on the Bion-M1 mission.
(Image: © Institute of Biomedical Problems of the Russian Academy of Sciences)

A Russian space capsule carrying lizards, mice, gerbils, fish and other creatures has safely returned to Earth, but not all of its animal passengers survived the month-long spaceflight, according to news reports.

The Bion-M1 space capsule launched into space on April 19 atop a Russian-built Soyuz 2 rocket from Baikonur Cosmodrome in Kazakhstan. On Sunday (May 19) the capsule came back to Earth, guided with the help of a parachute system to the ground in Russia's Orenburg region. It is the longest animal astronaut mission of its kind.

Space officials reportedly discovered that more than half of the 45 mice aboard the spacecraft died during the flight, the AFP reported. All eight Mongolian gerbils and many of the other critters also did not survive, but all 15 geckos did survive, the news service reported. [See photos of the Bion-M1 space animals mission]

According to Russian scientists, some losses were to be expected during the flight, and the mission still promises to yield valuable data from experiments on how space travel affects living things. The capsule spent 30 days orbiting 357 miles (575 kilometers) above Earth. Scientists planned to humanely euthanize the animals after their return to Earth in order to complete the experiments.

Animals have been launched into orbit in the past. In the early days of spaceflight, both the United States and the Soviet Union launched animals to space to test the safety of launching humans into orbit. But the Bion-M1 mission marks longest experiment of its kind.

"This is the first time that animals have been put in space on their own for so long," Vladimir Sychov of the Russian Academy of Sciences was quoted as saying by AFP in announcing the capsule's return. Sychov added that "less than half of the mice made it — but that was to be expected."

The project was run by Russia's Federal Space Agency, also called Roscosmos, but an international team of scientists was overseeing the mission's experiments. It was the first Russian space mission to launch animals into orbit in 17 years. Prior to Bion-M1, the most recent animal space mission for Russia was a Bion flight that sent rhesus monkeys, geckos and amphibians into orbit for 15 days in 1996.

Nicole Rayl, project manager for NASA's portion of the Bion-M1 animal astronaut mission, told SPACE.com in April that the flight would be important because of its duration and because it would allow scientists to analyze data with tools that weren't available to them during previous similar missions.

Scientists had prepared a battery of experiments designed to test how space travel would affect the bodies of the animals. One of the NASA experiments was aimed at studying how microgravity and radiation would impact sperm motility in mice. With eye toward long, interplanetary missions, Rayl said that test would be important to help determine if humans can procreate from sex in space.

According to the Associated Press, the animals were to be flown to Moscow after landing to undergo a series of tests at the Russian Academy of Sciences' Institute of Medical and Biological Problems, where Sychov is deputy director.