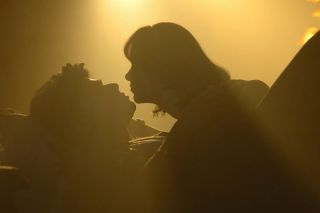 Getting busy might sound like a good way to pass the time on long space journeys, but it may not be the best idea, experts say.

If humans attempt to push the boundaries of exploration, space-based procreation will be an essential part of keeping a crew alive for the lifetime of a mission to a distant star. However, scientists don't know how safe sex in space and childbirth may be.

NASA officials have long maintained that there has never been any hanky-panky between the space agency's astronauts on the International Space Station or during space shuttle missions, which ended in 2011.

In light of the nonprofit Inspiration Mars Foundation's recent plan to send a married couple on a 501-day manned mission around Mars in 2018, however, the first documented case of human sex in space might be on the horizon.

"Well, I'm sure that the couple chosen for the Inspiration Mars plan will have sex in space," Laura Woodmansee, author of the book "Sex in Space," told SPACE.com in an email. "No doubt there! I think that’s kind of an unwritten requirement. That’s why, I suppose, the foundation is planning to send a married couple." [Private Manned Mars Mission in 2018 (Photos)]

But doing the deed in microgravity might be a tall order.

"Sex is very difficult in zero gravity, apparently, because you have no traction and you keep bumping against the walls," biologist Athena Andreadis of the University of Massachusetts Medical School told SPACE.com in 2011. "Think about it: you have no friction, you have no resistance."

In spite of the challenges sex in microgravity poses, Woodmansee thinks that the Inspiration Mars journey could motivate other couples to take advantage of less ambitious cosmic destinations, such as low-Earth orbit, should they become commercially available.

"If how-to stories return to Earth with the Inspiration Mars couple, it really could inspire a true space tourism industry," Woodmansee said. "Hopefully the couple will keep a diary and feel comfortable enough to clue the rest of us in on what to expect."

While sex in space could present some mechanical problems, conceiving a child in the final frontier might be downright dangerous.

"There are many risks to conception in low or microgravity, such as ectopic pregnancy," Woodmansee said. "And, without the protection of the Earth's atmosphere, the higher radiation levels raise the probability of birth defects."

Microgravity does strange things to the body. From bone density loss to odd fluid distribution, the human body was not built to live in low-gravity conditions. Astronauts combat these less-than-ideal conditions through exercise and other methods, but scientists are not sure how they will affect a mother and child.

"The thing is, a baby created and born in space could be perfectly fine," Woodmansee said. "We just don’t know enough about the subject. We've evolved here on the Earth, so moving to outer space is moving evolution in a different direction."