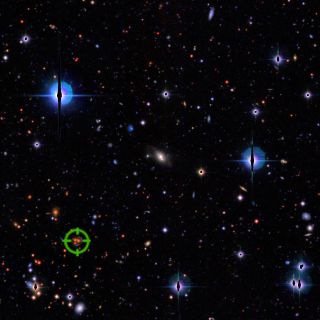 Online volunteers at spacewarps.org will learn to spot the telltale signs of a space warp galaxy, which bends light around it like a lens.
(Image: © Space Warps Collaboration)

Astronomers are calling for volunteers to help them search for "space warps," rare and distant galaxies that bend light around them like enormous lenses.

Citizen scientists participating in the Space Warps project, which launches Wednesday (May 8), could help shed light on the mysterious dark matter pervading the universe and aid research into a number of other cosmic phenomena, organizers said.

"Not only do space warps act like lenses, magnifying the distant galaxies behind them, but we can also use the light they distort to weigh them, helping us to figure out how much dark matter they contain and how it’s distributed," Phil Marshall, a physicist at Oxford University in England and one of Space Warps' leaders, said in a statement. [Gallery: Dark Matter Throughout the Universe]

"Gravitational lenses help us to answer all kinds of questions about galaxies, including how many very-low-mass stars, such as brown dwarfs — which aren’t bright enough to detect directly in many observations — are lurking in distant galaxies," Marshall added.

The Space Warps project asks armchair astronomers to spot gravitational lenses in hundreds of thousands of deep-sky images. The human brain is more adept than computers at picking out patterns, and amateurs can do it about as well as professional astronomers can, organizers said.

Participants don't have to spend hours peering at their computers to make a meaningful contribution, Space Warps leaders said.

"Even if individual visitors only spend a few minutes glancing over 40 or so images each, that’s really helpful to our research — we only need a handful of people to spot something in an image for us to say that it’s worth investigating," Oxford's Aprajita Verma, another of Space Warps' principal investigators, said in a statement.

Space Warps is affiliated with the Zooniverse, a broad citizen-science website that helps connect the public with projects in a wide range of fields. The Zooniverse began in July 2007 with the launch of Galaxy Zoo, which asks participants to classify galaxies according to their shape.

"The Zooniverse has always been about connecting people with the biggest questions, and now, with Space Warps, we're taking our first trip to the early universe," team member Arfon Smith, director of citizen science at Chicago's Adler Planetarium, said in a statement. "We're excited to let participants and planetarium visitors be the first to see some of the rarest astronomical objects of all."

You can join the Space Warps project starting on Wednesday by going to www.spacewarps.org. Visitors to the site will get a quick tutorial on what to look for, and then the hunt will be on.