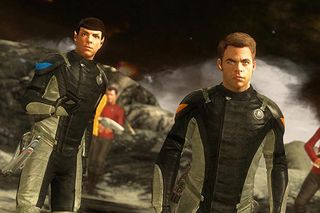 Kirk and Spock prepare for battle with this week's "Star Trek" game.

It looks like you'll have plenty of time to explore the final frontier of space this summer.

To coincide with the movie sequel "Star Trek Into Darkness," which arrives on May 17, Namco Bandai is releasing a new game that takes place in the time between J.J. Abrams' two ‘Star Trek’ films — and gives you direct control over protagonists Captain Kirk and Mr. Spock.

In "Star Trek," you'll guide the pair as they travel through the galaxy, working alongside various cohorts on the Starship Enterprise while dealing with an enemy that fans of the 1960s TV series will surely recognize: the Gorn. But this time, the Gorn actually resemble menacing lizard creatures — a far cry from their cheesy appearance on the TV series.

At first glance, "Star Trek" bears a similar design to that of EA's science-fiction-oriented "Mass Effect" series, with third-person shoot-outs (featuring phasers, of course) and plenty of exciting outer-space scenarios. However, with this game, Digital Extremes has included an intriguing cooperative-gameplay element, in which one player takes control of Kirk and another handles Spock. The two must work together through a number of situations in order to survive. (If you don't have a friend nearby, you can still play the game as either character, relying on an AI-driven partner.)

In one of these survival scenarios, Kirk is injured, forcing Spock to take him to the ship's sick bay. While they're there, Gorn soldiers break in, and each player must act differently. The one controlling Kirk must shoot at the lizards while lying in the bed, while the one portraying Spock must perform a push-button mini-game to keep him at full health.

In “Star Trek,” the way characters interact with one another depends on their relationship. For instance, when Kirk talks with Uhura, the ship's communication officer, she provides a situation update on the current mission. However, when Spock — her boyfriend in the current story arc — approaches her, she's concerned about his safety.

"Star Trek" stays very true to the nature of the films (partly because actors Chris Pine and Zachary Quinto — who play Kirk and Spock, respectively, in the movie — lent their likenesses and voices to the game), while presenting the kind of thrilling action that gamers have come to expect. And the Gorn add a surprising amount of depth to it all, even if they're a far cry from their classic appearance.

And, honestly, what player wouldn't love to knock out someone with a Vulcan neck grip? We can't wait to give that a try.