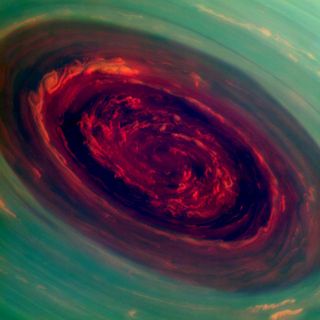 The spinning vortex of Saturn's north polar storm resembles a deep red rose surrounded by green foliage in this false-color image from NASA's Cassini spacecraft. The storm's eye is about 1,250 miles (2,000 kilometers) across with cloud speeds as fast as 330 mph (530 kph).
(Image: © NASA/JPL-Caltech/SSI)

Spectacular new images from a NASA spacecraft orbiting Saturn have captured the most detailed views ever of an enormous hurricane churning around the ringed planet's north pole.

The stunning new images and video of the Saturn hurricane, which were taken by NASA's Cassini probe, show that the storm's eye is 1,250 miles (2,000 kilometers) wide — about 20 times bigger than typical hurricane eyes on Earth. And the Saturn maelstrom is more powerful than its Earth counterparts, with winds at its outer edge whipping around at 330 mph (530 km/h).

"We did a double take when we saw this vortex because it looks so much like a hurricane on Earth," Cassini imaging team member Andrew Ingersoll, of Caltech in Pasadena, said in a statement. "But there it is at Saturn, on a much larger scale, and it is somehow getting by on the small amounts of water vapor in Saturn's hydrogen atmosphere." [Amazing Views of Saturn's Mysterious Hurricane (Photos)]

Saturn's hurricane swirls inside a mysterious, six-sided vortex. Unlike hurricanes on Earth, which tend to drift northward as our planet rotates, the Saturn storm and its hexagonal vortex have been camped out at the north pole for a while.

"The polar hurricane has nowhere else to go, and that's likely why it's stuck at the pole," Kunio Sayanagi, a Cassini imaging team associate at Hampton University in Hampton, Va., said in a statement.

While the Saturn hurricane is larger and more powerful than Earth hurricanes, storms on the two planets are alike in some ways. For example, both have central eyes containing very low clouds or no clouds at all, researchers said. Other shared traits are high clouds forming the eye wall, and a counterclockwise spin in the northern hemisphere.

So scientists plan to study how the Saturn storm feeds off atmospheric water vapor, in the hopes of gaining insight into hurricanes here on Earth (which gain their strength from warm ocean water).

Cassini's instruments detected the Saturn storm shortly after the probe arrived in orbit around the ringed planet in 2004. The hurricane was in darkness at the time, however, because it was the middle of the northern Saturn winter.

So Cassini had to wait for the onset of the northern spring in August 2009 to get a good look at the hurricane in visible light. The detailed new views required a shift in the spacecraft's orbit as well, achieved using flybys of Saturn's huge moon Titan, researchers said.

"Such a stunning and mesmerizing view of the hurricane-like storm at the north pole is only possible because Cassini is on a sportier course, with orbits tilted to loop the spacecraft above and below Saturn's equatorial plane," said Scott Edgington, Cassini deputy project scientist at NASA's Jet Propulsion Laboratory in Pasadena.

"You cannot see the polar regions very well from an equatorial orbit," Edgington added. "Observing the planet from different vantage points reveals more about the cloud layers that cover the entirety of the planet."