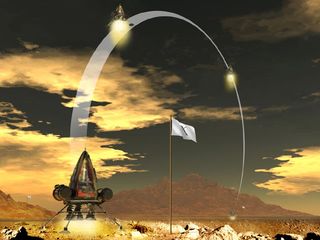 The X Prize Foundation and NASA will conduct the Lunar Lander Challenge, which offers $2 million in cash prizes for rocket-powered vehicles capable of hopping from one location to another, during the 2006 X Prize Cup.
(Image: © X Prize Foundation.)

The X PrizeFoundation is seeking public comment on draft rules for a lunar lander contestset for later this year.

The $2million Lunar Lander Challenge, part of NASA’s Centennial Challengesprogram to encourage development of low-cost space technologies, offers cashprizes for the successful flight of a vertical launch and landing vehicle.

Foundationofficials plan to award up to five prizes of different denominations under twocategories – the toughest challenge, a successful roundtrip on a mocklunar landscape, nets $1 million – during its 2006 XPrize Cup event this October. [A complete set of draft rules is available here.]

“Thepurpose of public comment is strictly for support,” X Prize Foundation spokespersonIan Murphy told SPACE.com, adding that final rules will be releasedbased on feedback on the draft set.

Accordingto draft rules for the lunar lander contest, competitors will be challenged tobuild a vehicle capable of launching vertically, travel a distance of 328 to656 feet (100 to 200 meters) horizontally, and then land at a designated site.A return trip would then occur between 5 minutes and 30 minutes later.

The contestis expected to be divided into two levels, one for flat terrain, and the otherto resemble the lunar surface – with other cash prize amounts based onlevel difficulty and finish results.

For Level 1contests, vehicles must fly higher than 328 feet (100 meters) for about 90 seconds andland on flat terrain no more than 10 meters from a target. Level 2 competitionswill feature the mock lunar surface and a minimum flight time of 180 seconds,according to the draft rules.

Commentsare sought by March 1 with initial sign-ups slated for May 15, according todraft rules, though Murphy added that the comment period could be extended to30 days.

Comments onthe draft rules set for the Lunar Lander Challenge can be sent via e-mail tothe X Prize Foundation via e-mail at: LLComment@xprize.org.