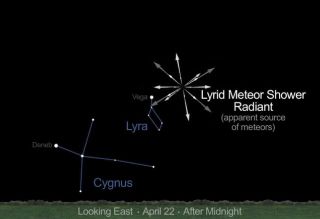 This sky map shows where to look in the eastern night sky on night of April 21 and the predawn hours of April 22 for the 2013 Lyrid meteor shower.
(Image: © JPL)

Editor's Note: If you missed the Lyrid meteor shower peak, then don't miss these spectacular photos of the celestial display by stargazers: Amazing Lyrid Meteor Shower Photos for 2013

The annual Lyrid meteor shower will peak tonight (April 21) and early Monday, but the moon's bright light may spoil the celestial fireworks display.

The Lyrid meteor shower occurs each year in mid-April when the Earth passes through a trail of dusty debris from the Comet Thatcher (C/1861 G1), which orbits the sun once every 415 years. Humans have been observing this particular meteor shower for at least 2,600 years.

Typically, the Lyrid meteor shower is a relatively faint stargazing event, though observers with clear dark skies away from city lights can usually spot up to 15 or 20 meteors an hour. The meteors appear to radiate out of the constellation Lyra (hence their name), which can be found in the eastern night sky tonight. [Amazing Lyrid meteor shower photos of 2012]

The moon is expected to spoil much of this year's Lyrid meteor display because it is currently in its bright gibbous phase, with the lunar disk nearly 85-percent illuminated, according to SPACE.com's stargazing columnist and meteorologist Joe Rao. That means that moonlight will likely wash out fainter Lyrid meteors, with only the brightest streakers being visible.

The best time to seek Lyrid meteors is actually in the wee hours of Monday morning (April 22) after the moon has set, but before the sun rises. This observing window opens at about 4 a.m. your local time and can close by about 4:30 a.m. At that time the Lyrid radiate will nearly directly overhead in the night sky, Rao explained.

Here are some tips to view the Lyrid meteor shower:

Don't stare directly at Lyra: Focusing on the radiant point of the meteor shower sounds like a good idea, but the Lyrid that tend to occur there appear to have short tails and look more like unimpressive dots, NASA scientists have said. A better technique is to lie on your back (or a comfortable reclining chair) and look straight up.

Get comfortable: It can be a long, cold night without warm clothes or a blanket, depending on your location. Also, don't expect to just step outside and see some meteors. Make sure to give yourself at least 40 minutes to allow your eyes to adjust to the darkness.

Get away from city lights: They really can spoil a meteor shower, and this year that potential is doubled since the moon is already interfering with the display.

The Lyrid meteor shower is not the only celestrial event occuring this week. On Thursday (April 25) the moon will pass through part of the Earth's shadow in a partial lunar eclipse. The eclipse will be primarily visible in its entirety from parts of eastern Europe or Africa, central Asia and western Australia, according to NASA eclipse expert Fred Espenak.

Editor's note: If you snap a great photo Lyrid meteor shower that you'd like to share for a possible story or image gallery, send photos, comments and your name and location to managing editor Tariq Malik at spacephotos@space.com.