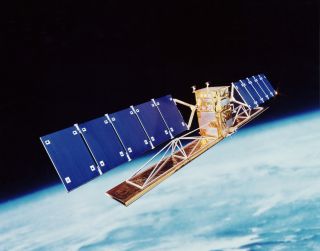 VICTORIA, British Columbia — A Canadian Space Agency (CSA) team will work over the next two weeks to try to determine if anything can be done to revive Canada’s Radarsat-1 satellite, but the outlook for the 17-year-old spacecraft is not good.

CSA announced April 9 that Radarsat-1 experienced a “technical anomaly” and that government and commercial users of the satellite have been advised that no new orders for imagery are being accepted.

He said expectations for a full recovery are low but that the team should know within two weeks.

The problem with the satellite occurred March 29. The spacecraft has been put into safe mode, a semi-dormant state by which it conserves energy.

Doyon said the problem with Radarsat-1’s power distribution system is not allowing the satellite’s solar arrays to recharge its otherwise fully functional batteries.

Doyon said the CSA team is looking at using various commands to the spacecraft to try to reroute the solar panels so the power would flow direct to the batteries.

Radarsat-1 launched in November 1995 and has been seen as a technological success story for Canada’s space sector. According to the CSA it has surpassed its expected lifetime by 12 years.

The satellite, which cost 620 million Canadian dollars ($618 million), is equipped with a powerful synthetic aperture radar instrument that acquires images of the Earth, day and night, in all weather and through cloud cover.

As early as February 1996, it began providing information to government, scientists and commercial users in the fields of cartography, ice studies and observations, hydrology, oceanography, agriculture, forestry and disaster management.

The satellite has been used by the Canadian military for a variety of surveillance missions, particularly in the maritime domain. Defence Department spokesman Dan Blouin said that the spacecraft has played a valuable role in Canadian security, but government officials have also noted that the loss of capabilities will not affect the country’s surveillance of its ocean approaches and northern territories.

“There are a number of other space observation sensors, including Radarsat-2, that the Canadian Forces use in support of defence and security operations,” Blouin said. “Our recently established Canadian Space Operations Cell is working with the Canadian Space Agency to determine the extent of the anomaly and is standing by to assist as and if required.”

A Defence Department source said Radarsat-1 is not expected to continue operations but “even if we can get 200 or 300 more images out of it before it goes, that’s still something.”

MDA Corp. of Richmond, British Columbia, which oversees the sale of the satellite’s imagery, issued a statement noting that Radarsat-1 is “experiencing technical difficulties.” But it added: “The impact of Radarsat-1 not functioning is not significant to MDA’s business.”

MDA spokeswoman Wendy Keyzer said the company would not be commenting further. Canada’s surveillance needs, both government and military, now fall to Radarsat-2, which was launched in 2007. Doyon said Radarsat-1 data requests are being rerouted to Radarsat-2, with operators trying to fit those in with already established requests for imagery from Radarsat-2. Radarsat-2 was built to last through 2014, but CSA officials expect the spacecraft to function well beyond then.

In January, the Canadian Space Agency and MDA Corp. announced they had signed a 706 million Canadian dollar contract that would see MDA build, launch and provide initial operations for the Radarsat Constellation Mission (RCM). RCM is a constellation of three radar-imaging satellites to conduct maritime and Arctic surveillance.

The satellites will be launched starting in 2018. The RCM project is led by the CSA and supported by its principal users which are Canadian federal government departments: the Department of National Defence, Fisheries and Oceans Canada, Agriculture and Agri-Food Canada, Environment Canada, Natural Resources Canada and Public Safety Canada.

The information provided by the RCM satellites will enable MDA to meet a larger range of monitoring needs in various sectors including oil and gas, mining, defense and security, according to company officials.