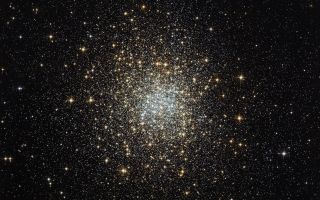 This stunning space wallpaper, taken using the NASA/ESA Hubble Space Telescope, shows a unique example of a globular cluster — Palomar 2. Palomar 2 is part of a group of 15 globulars known as the Palomar clusters.
(Image: © ESA/Hubble & NASA)

This stunning space wallpaper shows a unique example of a globular cluster — Palomar 2. Palomar 2 is part of a group of 15 globulars known as the Palomar clusters. They were discovered quite late because they are so faint — each is either extremely remote, very heavily hidden behind blankets of dust, or has a very small number of remaining stars. This NASA/ESA Hubble Space Telescope image shows Palomar 2 in a way that could not be captured from smaller or ground-based telescopes — some amateur astronomers with large telescopes attempt to observe all of the obscure and well-hidden Palomar 15 as a challenge, to see how many they can pick out from the starry sky.