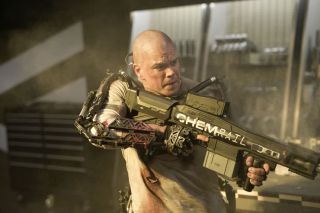 A group of movie fans and members of the entertainment press got an early look at this summer's film "Elysium" at a preview event recently.

The science fiction movie takes place in the year 2154 and features class struggle on a cosmic scale, with the wealthiest citizens living on a highly secured space station named Elysium, and the rest stuck on the dilapidated remains of Earth. The event debuted the "Elysium" trailer, along with a screening-exclusive 10-minute reel expanding on the film's basic concept.

"Elysium" is writer and director Neill Blomkamp's follow-up to 2009's "District 9," a surprise commercial hit and best picture nominee. The footage shown at the event displayed a similarly inventive visual flair, along with a palpable interest in using sci-fi allegories as a means of exploring real-life issues.

"In this film, and to a certain degree in 'District 9,' both times proper science was thrown out the window a little bit, to make the mechanics of what the theme is work," the director said. "Building a space station with marble and slate is not really something that you want to do, but the metaphor of Bel Air in space is correct, you just kind of work towards that. My approach is always, start off with something ridiculous, and then try to use the most realistic portrayal of the ridiculous as you can."

Matt Damon stars in the movie as Max Coburn, an ex-con on Earth who seeks the state-of-the-art health care only available on Elysium after contracting a terminal illness at his work.

In the footage shown, he was equipped with a cybernetic implant to help him achieve his goals, and pursues a character played by William Fichtner in an attempt to retrieve the data he needs to break into Elysium. Sharlto Copley, who starred in "District 9," plays antagonist Kruger in the new film, and also appeared in Los Angeles.

Producer Simon Kinberg was in attendance in LA and downplayed any thematic connection between "Elysium" and "X-Men: Days of Future Past," which he's writing and producing, and at least in its original comic book form also involves a dystopian future Earth.

"They're such different movies," Kinberg said. "The things that ["Elysium"] touches on, like immigration, and health care, and class issues, aren't really issues that this superhero movie is going to dive into in the same way. And the aesthetic is very different."