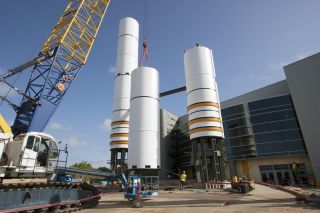 A crane lifts a segment for a set of twin, full-size replica solid rocket boosters in front of the Space Shuttle Atlantis exhibit under construction at the Kennedy Space Center Visitor Complex in Florida on April 11, 2013.
(Image: © NASA/Jim Grossmann)

Thirty-two years after NASA's first pair of solid rocket boosters launched the space shuttle's maiden mission, a set of the tall twin rockets has again begun rising over Florida's Cape Canaveral horizon. This time however, the towering rockets are serving as the launch pad for visitors touring the retired space shuttle Atlantis.

On Thursday (April 11), a 200-foot-tall (61 meters) crane continued the erection of two full-size, high-fidelity solid rocket booster replicas, which when vertically mated with a full scale model of an external tank (ET), will form the dramatic, 184-foot-tall (56 m) gateway to the Kennedy Space Center Visitor Complex's new home for the space shuttle Atlantis.

The booster models require six stages of assembly, half of which have now been completed. The crane recently hoisted two segments that sit atop the base to be later configured as the cone-shaped booster nozzle also known as the "aft skirt." In the coming weeks, another segment will be added and then topped off with the nose cone. After being raised and placed, workers secure and weld each section. [See photos of Shuttle Atlantis being built]

When completely assembled, the two 12-foot-wide (3.7 m) rockets will stand 149 feet (45 m) tall, or half the length of a U.S. football field. The solid rocket boosters (SRBs) will support the external fuel tank to be installed beginning in late April.

Once completed, the massive structure will serve as a beacon to guests, visible for miles, particularly when lighted at night. Although the public is accustomed to seeing images of the shuttle orbiter mated to the "stack," this gateway will feature only the twin white boosters and orange external tank, building excitement for the reveal of the authentic Atlantis orbiter inside the exhibit building.

"It is one thing for us to announce details and statistics about the space shuttle Atlantis and its dramatic, 184-foot-tall entrance, but it is quite another to actually be here in person, standing at the foot of these absolutely massive high-fidelity space shuttle components," said Bill Moore, chief operating officer of the Visitor Complex, in a statement. "Starting June 29, visitors will be able to get up close to the boosters and external tank in a way that only NASA personnel have been able to experience before."

Custom fabricator Penwal Industries of California designed and manufactured the model boosters and tank for the Atlantis exhibit, which overall was developed by St. Louis-based PGAV Destinations in partnership with NASA.

The real solid rocket boosters and external tank, which were in use throughout the space shuttle program since its first launch on April 12, 1981, provided the fuel to thrust the orbiters into space. The SRBs burned more than two million pounds of solid fuel as they accelerated the shuttle to 3,500 miles per hour (5633 kilometers per hour) for about two minutes. They were then jettisoned over the ocean to be recovered and used for future missions.

The Space Shuttle Atlantis exhibit, which showcases NASA's final orbiter to fly in space, will also feature state-of-the-art multimedia presentations and more than 60 interactive exhibits and simulators to bring to life the complex components and systems behind the spacecraft's engineering. The immersive experience also will shine a spotlight on the achievements made by the shuttle, including the building of the International Space Station and the launch and maintenance of the Hubble Space Telescope.

The 90,000-square-foot Space Shuttle Atlantis exhibit is the marquee element of the Visitor Complex's 10-year master plan by Delaware North Companies Parks & Resorts, which since 1995 has been contracted by NASA to operate the Kennedy Space Center Visitor Complex. The sprawling tourist attraction, including the $100 million Atlantis exhibit, is underwritten through admission and concession sales at no tax payer expense.

See collectSPACE.com for more photographs and video of the solid rocket booster replicas being installed at the Kennedy Space Center Visitor Complex in Florida.