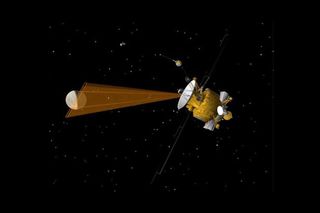 Proposed cuts included in NASA's 2014 budget request would sabotage a mission to Europa, an icy moon of Jupiter that could support life, scientists say.

The Obama administration released its 2014 budget proposal Wednesday (April 10). While the budget would set aside $17.7 billion for NASA, it would cut the agency's previous $1.5 billion budget for the planetary science division by $200 million, scientists said in a live webcast sponsored by the Planetary Society, an organization founded by scientist Carl Sagan to promote solar-system exploration.

The new budget does not follow the recommendations of the National Research Council's Planetary Science Decadal Survey, a 410-page report that surveyed dozens of planetary scientists to identify the top priorities for the field over the next decade, Nye said.

"This very-well-thought-out, strongly supported list of suggestions has not really been embraced — or the better word would be 'ignored,'" Nye said.

Europa, a mysterious moon of Jupiter, has a churning ocean locked beneath its icy surface, making it one of the best potential sources of extraterrestrial life in the solar system.

But the new budget doesn't include any money to explore Europa's ice-covered ocean.

The budget does set aside funds to identify asteroids that could threaten Earth and to bring back samples from an asteroid, said Bill Adkins, a consultant for the society.

The administration's budget also includes funding to send a rover, much like the Curiosity rover, to Mars in 2020.

However, the budget does not set aside funds to take rocks back from the planet to study them on Earth, Adkins said.

"We want to bring back a piece of Mars," Adkins said. "Here on Earth, we have physically much larger instruments — much higher-power instruments than we're able to put on even our very best rovers."

The budgetary picture could get better, as Congress still has the option to amend the 2014 budget request to include funding for Europa and other planetary priorities, Adkins noted.

But it could also get worse. The proposed budget assumes that Congress and the president will end the sequester prior to the start of the 2014 budget cycle. If that doesn’t happen, more cuts could be triggered, Adkins said.