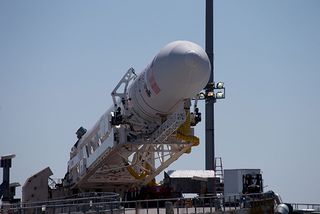 The Transporter/Erector/Launcher raises the A-ONE Rocket to a vertical position on the launch pad and serves as a support interface between the rocket and the launch complex’s systems. Image taken April 6, 2013.
(Image: © Orbital Sciences Corporation / NASA)

A new private rocket rolled out onto its Virginia coast launch pad Saturday (April 6) in anticipation of its first test launch next week.

The Antares rocket — developed by aerospace firm Orbital Sciences Corp. and launching from NASA's Wallops Flight Facility on Wallops Island, Va. — is expected to eventually deliver cargo to the International Space Station as part of a $1.9 billion deal with the space agency. Liftoff is set for Wednesday, April 17.

"With the completion of the Antares roll out today, we are on a clear path to a launch date of April 17, provided there are no significant weather disruptions or major vehicle check-out delays between now and then," Orbital's Antares program manager Michael Pinkston said in a statement.

During the test flight (dubbed A-ONE), Antares is expected to carry a mockup of Orbital's unmanned Cygnus spacecraft to an altitude of 155 miles to 185 miles (250 to 300 kilometers) above the Earth's surface. The Cygnus mockup is a mass simulator of the spacecraft designed to mimic the weight of an actual Orbital Cygnus vehicle, which the company plans to use for unmanned cargo delivers to the International Space Station. [Photos: Orbital's Antares Rocket and Cygnus Capsule]

Antares will also carry more than its simulated payload. The rocket is scheduled to deliver four small satellites into orbit. Three PhoneSats (two PhoneSat 1.0s plus one PhoneSat 2.0) and a nanosatellite called the Dove-1 will fly aboard the rocket.

If all goes according to plan during this test launch, the private spaceflight company will launch a demonstration mission to the space station using the company's first flightworthty Cygnus capsule sometime later this year.

Orbital is expected to make eight unmanned supply runs with Cygnus and Antares to the space station under a $1.9 billion contract with NASA. Another private spaceflight firm — the Hawthorne, Calif.-based SpaceX — has already flown two of at least 12 station cargo delivery missions using its Dragon capsule and Falcon 9 rocket as part of a $1.6 billion deal with NASA.

SpaceX's latest Dragon capsule flight visited the space station last month and returned to Earth on March 26, successfully splashing down in the Pacific Ocean after a three-week mission.

NASA plans to rely on private spaceships to ferry American astronauts to and from the International Space Station by 2017. Since the end of the agency's space shuttle program in 2011, NASA has been dependent upon Russian Soyuz spacecraft to ferry astronauts to the station and back home again.

SpaceX is currently developing a manned version of Dragon, and is one of several companies developing crewed spacecraft in hopes of serving NASA's human spaceflight needs.

Aerospace veteran Boeing is developing a crew capsule called CST-100 to launch on an Atlas 5 rocket, while billionaire Jeff Bezo's Blue Origin firm is designing its own rocket to launch its biconic Space Vehicle. Sierra Nevada Space Systems  in Colorado, meanwhile, is developing a new reusable space plane, called Dream Chaser, to ferry astronauts to and from low-Earth orbit.