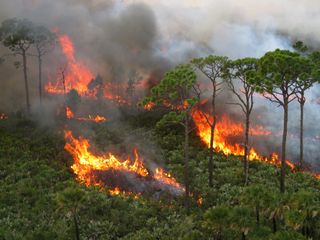 Fire behavior during the second day of the Center fire as seen from a helicopter. The fire occurred just south of NASA’s Kennedy Space Center headquarters on Merritt Island in Audobon, Florida. This image was taken on April 2, 2013.
(Image: © Michael Good - USFWS)

Firefighters are working to protect NASA's gateway to space, the Kennedy Space Center in Florida, from a 2,000-acre wildfire, according to Central Florida's News 13.

According to the CFNews 13 report, the fire began Monday (April 1) when lightning triggered the blaze at the Merrit Island National Wildlife Refuge in Brevard County. The wildlife preserve is also home to NASA's Kennedy Space Center, which served as the launching site for its space shuttles, Apollo moon missions and other manned spaceflights. [See more wildfire photos from NASA's Kennedy Space Center]

So far no damage from the fire has been reported at NASA's KSC facilities. See the latest wildfire news from CFNews 13