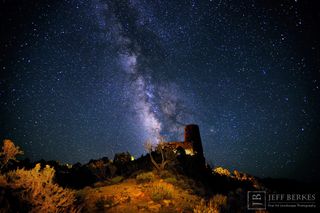 When astrophotographer Jeff Berkes had a sleepless night in the Grand Canyon on his way to Page, Ariz., last May, he didn't just do what most people would — try to force himself back to sleep. Instead, he went to work photographing the night sky.

The frame shown here comes from a time-lapse video he created that night, showing the Milky Way galaxy boldly shining over a watchtower at the Grand Canyon.

"With our national parks needing more support this year than ever, I encourage everyone to take a short trip into a local national park, and see what joys they have to offer," Berkes told SPACE.com in an email. "National Park Week is coming up in April." [Amazing Night Sky Photos by Jeff Berkes (Gallery)]

National Park Week runs from April 20 to April 28. During April 22 to 26, every national park in the United States will have free admission. Berkes also wanted to remind SPACE.com readers that International Dark Sky Week will run April 5 to 11. The event seeks to raise awareness of how light pollution washes out the dazzling night sky.

Berkes created the image, which he calls "The Watch Tower," on May 17, 2012, while en route to Page, Ariz., to photograph the dazzling "ring of fire" annular solar eclipse of May 20 of that year. He is a veteran night sky photographer based in Pennsylvania, where he runs Jeff Berkes Photography.