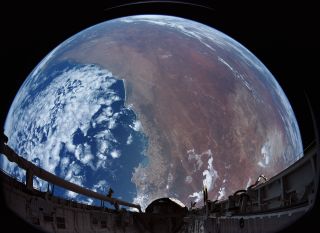 The Earth as seen from orbit, filmed in space by an IMAX camera aboard a NASA space shuttle mission in December 1988.
(Image: © NASA)

IMAX, the large-format film company, has announced it will again launch moviegoers into outer space, this time in a 3D feature to be produced with The Walt Disney Studios.

The still-to-be-titled film will be the eighth time IMAX has pointed its cameras and screens toward space in a movie led by filmmaker Toni Myers. According to the company, the production will use "high-resolution photography and videography to offer breathtaking, illuminating views of our home planet from space" to explore the changes that have occurred on Earth in just the past several decades.

Targeted for a 2015 release and made in cooperation with NASA, the film will focus on humankind's future on – and off – the planet, "increasing our understanding of the solar system," while also virtually traveling light-years to other star systems to ponder the possibilities of Goldilocks, the term planetary scientists give to planets that fall inside a star's habitable zone, like the Earth.

The space film will mark the first time that IMAX and The Walt Disney Studios have jointly produced a film together. The companies previously collaborated on the distribution of movies. [Photos: IMAX Cameras in Space]

"Disney has always been a leader in creating immersive fantasy worlds for audiences, but we know there's no more immersive world than the real one," said Alan Bergman, president of The Walt Disney Studios. "This is a bird's eye view of our incredible universe and our future in it, and we are looking forward to diving in."

"We are thrilled to collaborate on our first joint production with Disney," Greg Foster, the chairman and president of IMAX Entertainment, remarked. "Toni Myers and her team have given us films that have been educating, delighting and astonishing IMAX audiences for many years, and we look forward to continuing the journey."

Myers has been editing, writing, producing, and directing films specifically tailored for IMAX since 1971. Her most recent documentary feature and seventh space film was "Hubble 3D."The movie, which chronicled the final space shuttle mission to upgrade the Hubble Space Telescope, has grossed nearly $53 million in IMAX theaters since its release in 2010.

"The 1990 IMAX film 'Blue Planet' was the first time we pointed the IMAX cameras from space back to Earth to reveal, on a grand scale, the changes being made to our planet by both natural and human forces," Myers said. "It's marvelous and important to have this new opportunity to show what has happened to our planet since then."

"The International Space Station is a unique and perfect platform from which to see how our home is evolving," she added, "and at the same time explore our exciting future in other worlds."