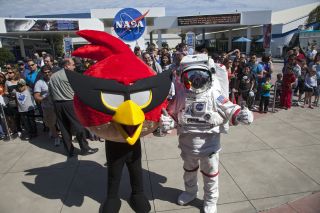 The Angry Birds have landed at NASA's gateway to space.

The exhibition, which opened at the Kennedy Space Center on March 22, has six different Angry Birds experiences for visitors to choose from, according to an exhibit description from the space center:

This isn't the first time Angry Birds has partnered with NASA. Rovio, the game's parent company, collaborated with the space agency when they released "Angry Birds Space" for a variety of computer and mobile devices. They teamed up again for "Angry Birds Space: Red Planet," which saw NASA's Mars rover Curiosity join the game franchise.

A message on Twitter from NASA to the game company set the idea for making a space-themed Angry Birds in motion.

"Hey @RovioMobile, our computers are a bit better than they were in '69," NASA officials wrote on the social media website. "We might be able to help you launch birds if you find pigs in space."

At the end of June, the space center will hold a grand opening event in honor of the Space Shuttle Atlantis' new home at Kennedy.