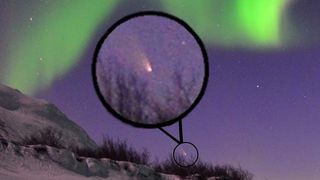 The northern lights and a bright comet dance together over the Scandinavian Arctic in a stunning new video.

Astrophotographer Chad Blakley captured the footage of Comet Pan-STARRS blazing amid dazzling green auroras on March 20, during a trip to Abisko National Park in northern Sweden.

"The auroras began as soon as the sun went down and continued to dance all night long," Blakley told SPACE.com via email in a description of the comet and aurora video. "To say that we had an incredible night would be a huge understatement!"

Comet Pan-STARRS burns just above the horizon in the 80-second video, while the shifting green flames of Sweden's northern lights flicker above and around the icy wanderer. [See photos of Comet Pan-STARRS and the Northern Lights]

Blakely is not the only stargazer to catch a dazzling view of Comet Pan-STARRS and the northern lights. Astrophotographer Tommy Eliassen also captured the view from Norway when he photographed the comet on March 19.

Eliassen's photo shows the comet hovering over snow-covered mountains as the northern lights glow like a bright ribbon of green light. Eliassen said he captured the sight from Meløy, Nordland, in Norway.

The comet, which is officially known as C/2011 L4 (PANSTARRS), was discovered in June 2011 by astronomers using the Panoramic Survey Telescope and Rapid Response System telescope in Hawaii (hence the name). Researchers think this is Pan-STARRS' first trip to the inner solar system from the distant, icy Oort Cloud.

Comet Pan-STARRS has been putting on a show in the Northern Hemisphere for much of March, shining just above the western horizon with naked-eye visibility. The comet made its closest approach to the sun on March 10 and is dimming now, but it's still visible low in the western sky around sunset.

The comet is expected to have dimmed to the point that it is only visible through binoculars or small telescopes by the end of March.

The auroras — also known as the northern lights and southern lights — result when charged particles from the sun collide with molecules high in Earth's atmosphere, generating a glow. They're usually restricted to high latitudes because our planet's magnetic field lines tend to funnel these particles toward the poles.

But powerful solar eruptions known as coronal mass ejections can supercharge the auroras, increasing their intensity and occasionally bringing them into view for people in more temperate climes. After a big CME in 1909, for example, auroras were visible in Singapore, which lies just north of the equator.