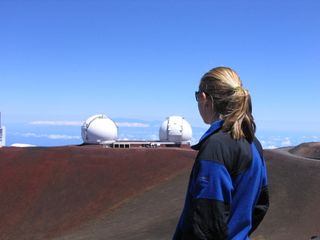 I'm standing on a raised platform inside a giant dome, peering down at what looks like a sizable hexagon of chicken wire. But it’s not chicken wire, it’s the 36 interlocking mirror segments of one of the Keck telescopes on Hawaii's Big Island, the largest fully operational optical telescopes in the world.

As Keck this week celebrates the 20th anniversary of its first science observations on March 16, 1993, I've been reminiscing on what this behemoth of astronomy means to me.

Growing up, I had privileged access to the Keck Observatory because my dad was the head of the software department, and later, the deputy director (the position he still holds). We moved to Hawaii from California when I was just a year old, when the Keck telescope was being built, so it can safely be said that I owe much of my childhood experience to this institution. But to me, it was just dad's work.

I remember nights when my father had to work late at the observatory headquarters in the town of Waimea. He would take me to visit the astronomers who happened to be observing — people like Geoff Marcy, the famed University of California, Berkeley planet hunter, or Andrea Ghez, the UCLA astronomer who proved the existence of a supermassive black hole at the center of our galaxy. [10 Amazing Keck Discoveries]

The astronomers never gazed through an eyepiece — the Keck telescopes don't have them, in fact. The telescopes are controlled remotely from headquarters, using sophisticated software programs that aim the telescope at the part of the sky being studied.

Of course, I also got to visit the telescopes themselves, on the summit of the nearly 14,000-foot (4,300 meters) mountain Mauna Kea. Up there, Hawaii looks nothing like a tropical island. In fact, the red cinder cone landscape and freezing temperatures give one the distinct impression of being on Mars. The twin white domes of the Keck telescopes set against a snowy backdrop above the clouds is a sight that never gets old.

Technically, people under age 16 weren’t allowed to go inside the telescope domes, but I recall one of my father’s colleagues giving us a sneak peak when I was maybe age 8 or so. My memory of the visit is a bit hazy, but my dad tells me that, while I was intrigued by the telescope, what I was really interested in was the hot chocolate in the observatory kitchen.

Later visits stick in my memory much better, such as the time my father took me up to see the telescope with my granny. That time, we dressed up in protective scrubs and visited the clean room where they clean the 6-foot (1.8 meters) mirror segments and recoat them with aluminum. On another visit, the sodium laser on the Keck I telescope was being commissioned. Standing outside the dome and craning my head skyward, the laser resembled a faint orange light saber reaching high into the stratosphere.

But perhaps the most impressive thing about growing up in the shadow of Keck was not the telescope itself, but how it fueled my curiosity about the night sky, and the scientific endeavor in general. Though I never became an astronomer, I did go on to study engineering, and ultimately ended up as a science storyteller. And studying the universe is pretty much the greatest story ever.