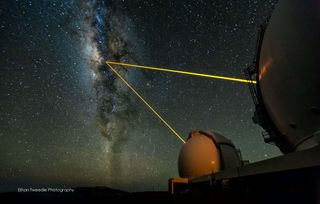 A celebration of the W.M. Keck Observatory's 20th anniversary this week will also include a plea for more money to keep the iconic telescopes running in the next year.

"We're a little concerned because of what's going on in Washington," said Debbie Godwin, director of advancement for Keck's foundation.

Roughly $6.5 million, more than a quarter of the Keck Observatory's annual budget, comes from the U.S. National Science Foundation, but that could change due to across-the-board federal cuts coming under the sequestration process, Godwin said.

Half of the Hawaiian observatory's $23 million budget comes from the University of California and the California Institute of Technology. Representatives from each institution sit on Keck's board of directors. [10 Amazing Keck Discoveries]

It's not the universities but rather the philanthropists that Keck hopes will fill the shortfall. Normally, the observatory's minders "would really be over the moon if we received $5 million of philanthropy a year," Godwin said.

But this year, she said, they'll really have to step that up. Godwin added that the directors are optimistic the 20th anniversary celebrations will convince philanthropists to be generous.

"We are hoping that this anniversary will put a clarion call that says this is something of value in our world," she said.

At 20 years old, Keck is an invaluable tool for hunting down exoplanets, exploring galaxies on the edge of the universe and occasionally snapping pictures of moons and planets in Earth's own solar system.

The twin telescopes, each with 32-foot (10 meter) diameters, are the largest optical scopes around. They boast an extensive legacy of discovery, ranging from co-discovering methane on Mars to charting the acceleration of the universe.

Competition is fierce for observing time at Keck, with a typical research project receiving a couple of nights annually. Last year, the telescopes generated 315 research papers — almost a paper for every observing night of the year, Godwin pointed out.

Look 10-20 years further down the line, though, and Keck will be a small telescope amid newer and larger observatories.

For example, the European Extremely Large Telescope in Chile should come online around 2022. Its 129-foot (39.3 meter) mirror will be more than four times the size of one Keck telescope.

Godwin anticipates demand for Keck will begin to fade around then, but that decreased traffic will be a boon to astronomers now jostling for observing time.

Instead of brief runs, interested scientists may be able to use the telescope for days at a time. Astronomers could do complementary runs to the Thirty Meter Telescope, a giant observatory planned for Hawaii. This scope will observe in wavelengths ranging from the ultraviolet to the mid-infrared and could come online as early as 2020. [The 10 Biggest Telescopes on Earth]

"We'll not be obsolete for many decades," Godwin said.

Like any technological marvel, Keck has to keep innovating to stay near the top of the game. The telescopes each use a laser-guided system that allows them to focus their mirrors properly on distant targets, correcting for distortions in the atmosphere.

In 2015, the observatory plans to put in a new laser system for the Keck II telescope. It's the first instrument entirely funded by private philanthropy.

Coinciding with the anniversary, Keck's foundation will also launch fundraising for the cosmic web imager. This spectrograph instrument would probe the structure of the universe.

While that instrument is still on the drawing board, Keck's foundation hopes to have it online within five years. Construction will require about $1 million from private donors.

Since the dates that new instruments will come online are not guaranteed, the staff working on the observatories sometimes need to adapt the older ones to new uses.

One example comes from studies of the field of ultra-faint galaxies, a collection of hobbit-like galaxies scattered around the Milky Way that are the least luminous ones known. However, they also contain the most dark matter, a mysterious substance that makes up most of the matter in the universe.

Keck's existing spectrograph was not designed to pick up these objects, as nobody knew the dim galaxies existed, said Yale University astronomer Marla Geha. That spectrograph does, however, perfectly balance the needs of adequate resolution and light collection to pick up these wispy objects.

Geha, who was observing at Keck while SPACE.com spoke with her Tuesday (March 12), said she is currently using the telescope to peer at stars in these galaxies and measure the stellar chemistries.

The ultra-faint galaxies "probably formed all those stars within the first billion years of the universe," Geha added. The galaxies "are really quite old, and there’s no other galaxy out there that has quite as old stars."

The staff at Keck also lets astronomers try new techniques, allowing them to make discoveries that would not have been possible when using the hardware in its existing configuration, said astronomer Adam Kraus.

Kraus, who is a Hubble Fellow at Harvard University, praised Keck's "adaptive optics" system, which adjusts the mirror to correct for turbulence in the atmosphere, producing sharper images.

However, adaptive optics can sometimes create ghost images of the star. That's not ideal for finding alien planets.

Last year, Kraus and his collaborators put an aperture mask in the light path of one of the Keck telescopes. The mask, punched with holes, allowed light to pass through several smaller paths.

"It lets us ferret out these remaining imperfections," Kraus said. That makes it easier to see exoplanets under certain conditions, such as if they are bright and close to the star.

In this case, Kraus and his team made a major discovery: spotting an alien planet being born in a dusty disc around its star. No one had ever seen a planet in the process of formation before.

"It's a very nimble and flexible observatory," he said.