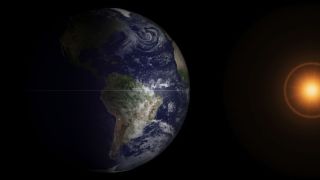 It's that time of year again: the first day of spring.

On this special date, the length of the day and night are about the same for most of the planet. The amount of solar energy delivered to the Northern and Southern Hemisphere is also equal.

You can see that effect in an image taken this morning (March 20) at 7:45 a.m. Eastern Daylight Time (11:45 a.m. Universal Time) by the National Oceanographic and Atmospheric Administration's GOES-13 satellite. The photo shows both hemispheres equally lit. As spring wears on, the Northern Hemisphere will receive more sun than the Southern Hemisphere, creating the familiar seasons in each region (summer and winter, respectively).

This image was taken moments after the exact occurrence of the equinox, which happened at 7:02 a.m. EDT (11:02 a.m. Universal Time).

The dawning of spring comes on different dates (from March 19-21) and different times each year for two reasons. First, the year is not an exact number of whole days; it takes the Earth about 365 and one-quarter days to orbit the sun (which is why we have a leap day every four years). Second, Earth circles the sun in a slightly non-elliptical orbit, and that, in addition to the gravitational pull of the other planets, changes Earth's orientation to the sun from year to year. Equinoxes (which mark the onset of spring and autumn) and solstices (which mark the beginnings of summer and winter) are points in time and space that designate a transition in the planet's annual trip around the sun.

In the higher latitudes of the Northern Hemisphere, the time of "equal day and night" occurs a few days before the spring equinox, while in the Southern Hemisphere that date comes after the March equinox, according to the National Weather Service.

The sun in this image was created artificially, though the GOES spacecraft does have sensors which constantly monitor the sun for solar activity, NOAA reports.