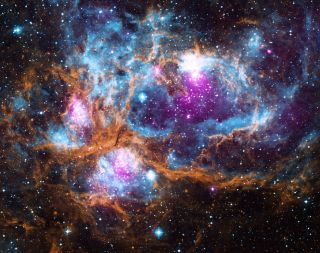 More than 3,500 people are expected to attend the largest "Super Bowl of astronomy" ever at the 235th meeting of the American Astronomical Society in Honolulu, Hawaii Jan. 5-8, 2020.
(Image: © Credits: X-ray: NASA/CXC/PSU/L. Townsley et al; UKIRT; JPL-Caltech)

Thousands of scientists from around the world are converging on Hawaii this week to unveil the latest discoveries about the universe at the so-called "Super Bowl of astronomy." If the event, the 235th meeting of the American Astronomical Society, had a stadium, it would be packed.

"This will be the biggest AAS meeting in history," AAS spokesperson Rick Feinberg told Space.com in an email.

More than 3,500 scientists are expected to attend the four-day conference in Honolulu, Hawaii, Feinberg said. The first press conferences and talks begin today (Jan. 5). They'll end on Wednesday (Jan. 8), with observatory tours and other presentations scheduled throughout the week.

NASA, as expected, will showcase its latest space findings at the conference, including the agency's recent exoplanet discoveries by the TESS space telescope and the Hubble Space Telescope, which celebrates its 30th anniversary in April.

"NASA researchers will present new findings on a wide range of astrophysics and other space science topics at the 235th Meeting of the American Astronomical Society, Saturday, Jan. 4, through Wednesday, Jan. 8, in Honolulu," NASA officials said in a statement. "Agency scientists and their colleagues who use NASA research capabilities also will present noteworthy findings during scientific sessions that are open to registered media."

You can find the list of  the press conferences here, including what scientists will discuss in each session over the next four days.

The role of Hawaii in astronomy will take center stage at this year's AAS meeting.

"The main new feature of this meeting is our major effort to bring the astronomical community and the local community together as much as possible to discuss the future of astronomy in Hawaii," Feinberg said.

Hawaii has long been a focal point for astronomy. The Keck Observatory, which has the largest active optical telescopes on Earth, and other observatories sit atop the volcano Mauna Kea and an even larger telescope, the Thirty Meter Telescope, is planned to be built at the site.

But construction of the Thirty Meter Telescope (TMT) has been stalled due to ongoing protests by indigenous groups that consider Mauna Kea sacred. The demonstrations stepped up in 2019.

"TMT is committed to finding a peaceful way forward on Maunakea for all," the builders of the new telescope wrote in a Dec. 20 update.

"We are sensitive to the ongoing struggles of indigenous populations around the world, and we will continue to support conversations around TMT and the larger issues for which it has become a flashpoint," Gordon Squires, TMT VP for External Affairs, said in the statement. "We are participating in private conversations with community leaders, but these conversations will take time."