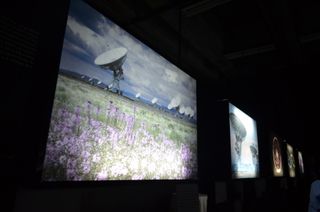 Visitors to the new "Radio Astronomy: A New Window on the Universe" exhibition in Chile's Santiago Metro will be immersed in a dark room illuminated by glowing cosmic photos.
(Image: © Clara Moskowitz/SPACE.com)

SANTIAGO, Chile — Chileans say their country has the world's best night skies, and many astronomers agree with them — a number of Earth's premier telescopes have been built here. To celebrate the opening of a new observatory called ALMA, scientists have put together an exhibition to bring astronomy to the people of Chile during their morning commute.

Between Monday (March 11) and the end of the month, subway riders in Chile's capital can attend the show, called "Radio Astronomy: A New Window on the Universe" ("Radioastronomia: Una Nueva Ventana Al Universo"), located in a hall at the Baquedano station of the Santiago Metro.

To celebrate opening day of the exhibition, scientists, officials and educators gathered Monday for speeches, snacks and a special musical performance by local musician Constanza Biagini. Dressed in a galaxy-themed costume with a radio antenna fascinator, Biagini sang a piece inspired by the sounds of radio astronomy. Her largely improvised vocals wove in and out of an eerie, evocative pastiche of musical instruments and sounds collected by radio observatories, and she performed against a backdrop of celestial imagery and cartoon radio waves. [8 Cool Facts About the ALMA Telescope]

"The noises are done by NRAO radio telescopes and I try to make similar noises with the different registers of my voice," Biagini said via a translator. "I am always thinking of creating sounds similar to the noises from the radio telescopes."

Today's ceremony was part of a weeklong series of events planned around the official opening of ALMA, a $1.3 billion radio observatory made of 66 connected antennas that can image some of the most distant, ancient galaxies and spot baby planets in the process of forming. The project is jointly funded by science agencies in North America, Europe and East Asia, and built with the cooperation of the Chilean government.

Tomorrow (March 13), Chile's president, along with other officials and astronomers, will attend an inauguration ceremony for the telescope at its site high in the Atacama desert.

But for those unable to see ALMA radio telescope in person, the subway exhibition is the next best thing.

The show aims to reach people who aren't tapped into the amazing science happening in their country's backyard. Though many Chileans are proud of their country's status as host to some of the world's best telescopes, too many don't know what these instruments actually do, Chilean scientists said.

"Many Chilean people don't understand too much about astronomy," said Sergio Cabezon, a public outreach officer at the Chilean office of the U.S. National Radio Astronomy Observatory (NRAO) and Associated Universities Inc., who oversaw planning of the exhibition. "That's probably the fault of the observatories. We need to give them more spaces like this to understand what astronomy is."

Cabezon chose the Santiago Metro as the location for the exhibition in an attempt to reach as many people as possible. About 2 million people pass through the Baquedano station daily, and Cabezon expects around 15,000 to visit the exhibition, including school groups.

"We wanted to focus on a general audience, but firstly on students from 5 to 18 years old," Cabezon said.

The show is staffed from Monday to Sunday, from 9 a.m. to 8 p.m., by knowledgeable explainers eager to ignite excitement about the cosmos in visitors of all ages.

Scientists are hoping it helps connect more Chileans to the unique windows on the universe located in their own country.

"When people are exposed to things like this, I know it's going to have a lot of traction," said Chilean scientist Mauricio Pilleux, ALMA's deputy North American project manager. "Astronomy is this thing of prestige, and people want to be a part of it."

Clara Moskowitz is visiting Chile for the ALMA inauguration on a trip paid for by the U.S. National Radio Astronomy Observatory.