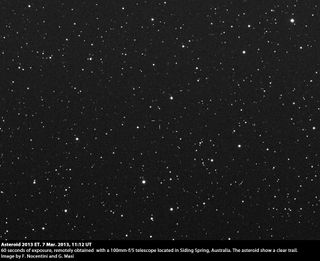 Editor's Note: Unexpectedly strong winds and clouds have forced the Virtual Telescope Project to cancel its live webcast of the asteroid 2013 ET today. The next chance to see the asteroid will be Saturday, March 9, in a 3:15 p.m. ET webcast by the Slooh Space Telescope as detailed in the original report below:

An asteroid the size of a city block is due to make a close pass by Earth on Saturday (March 9), and you can get a front-row view via two back-to-back webcasts.

The asteroid 2013 ET was discovered March 3 by the Catalina Sky Survey based at the University of Arizona. During the flyby, the space rock will fly within 2.5 times the moon's distance from Earth. On average, the moon is about 238,000 miles (about 383,000 kilometers) from Earth.

The first asteroid 2013 ET event will occur today in a free live webcast from the Virtual Telescope Project in Ceccano, Italy, starting at 2 p.m. EST (1900 GMT). You can watch the asteroid webcast on SPACE.com here.

"No matter how many asteroids approach us, even within a few days, the interest for these intriguing cosmic objects is always very high," Virtual Telescope founder Gianluca Masi, an astrophysicist, told SPACE.com. "I believe that these close approaches should be used to increase in the public a correct perception of the real situation, to avoid confusion and false alarms."

You can visit the Virtual Telescope directly at: http://www.astrowebtv.org.

On Saturday (March 9), the online Slooh Space Telescope, which also offers stargazing events, will provide a free webcast of the asteroid from its observatory in the Canary Islands, off the coast of west Africa. The Slooh webcast will feature discussions by Slooh president Patrick Paolucci, Slooh engineer Paul Cox, and documentary filmmaker Duncan Copp. That show begins Saturday at 3:15 p.m. EST (2015 GMT).

"We only have a short viewing window of an hour or so from our Canary Islands observatory on March 9, but we wanted to give the general public a front row seat to witness this new asteroid in real time as it passes by Earth," Slooh president Patrick Paolucci said in a statement.

The Slooh webcast will also be carried on SPACE.com, and can be accessed directly at the Slooh Space Camera website.

Asteroid 2013 ET is not quite bright enough to view through small backyard telescopes or binoculars, but should be nicely visible in the footage from the online telescopes.

This asteroid pass comes less than a month after two major space rock events: the close flyby of asteroid DA14 near Earth, and the impact of a meteor into Russia. And 2013 ET's approach comes just days after the asteroid 2013 EC flew within 230,000 miles (370,000 km) of Earth early Monday.

"The recent flurry of asteroidal close calls and near misses, including the double whammy of DA14 and the Siberian meteor on February 15, is starting to make our region of space seem like a video game or pinball contest," astronomer Bob Berman, columnist and contributing editor of Astronomy magazine, said in a statement. "This latest interloper arrives just as serious debates are unfolding as to the obvious need for more and better monitoring of potentially hazardous asteroids crossing our orbit — and even whether we should develop a 'deflection' system."

NASA and other astronomers around the world regularly scan the night sky for signs of asteroids that could pose a potential impact threat to Earth.