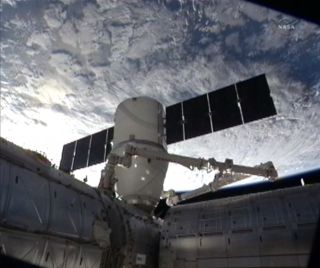 The privately built SpaceX Dragon cargo capsule is moved into its final position on the International Space Station's Harmony module with a bright Earth in the background in this view captured during the capsule's March 3, 2013, docking. The Dragon capsule is delivery cargo to the space station for NASA.
(Image: © NASA TV)

An unmanned commercial space capsule packed with precious cargo successfully linked up with the International Space Station early Sunday (March 3), making a flawless orbital delivery after overcoming a thruster glitch that delayed its arrival by a day.

The SpaceX-built Dragon cargo capsule docked with the space station at 8:56 a.m. EST (1356)  as the two spacecraft soared 253 miles (407 kilometers) over the Arabian Sea. NASA flight controllers performed the orbital link-up remotely by commanding the space station's Canadian-built robotic arm, which had latched onto Dragon three hours earlier, to attach the capsule to an available docking port.

"The Dragon is ours! Maneuvering it now on Canadarm2 to a docking port, will open hatches once secure," station astronaut Chris Hadfield of Canada wrote in a Twitter post.  "Look forward to new smells. Great!" [See photos of the Dragon's space station arrival]

Dragon reached the space station at 5:31 a.m. EST (1031 GMT), a full hour ahead of schedule. Two NASA astronauts, station commander Kevin Ford and flight engineer Thomas Marshburn, used the station's arm to grapple the capsule as it approached close to the orbiting lab.

After several hours of troubleshooting, SpaceX engineers isolated the glitch to a pressurization problem in the thruster system and devised a fix that solved the problem. Because of the time needed for the fix, the Dragon capsule missed its initial rendezvous slated for Saturday (March 2).

The spacecraft's arrival on Sunday, however, went extremely smoothly. About four hours after the capsule was berthed to space station, astronauts opened the hatches between the two spacecraft to enter the Dragon, NASA officials said.

"In solving the issues facing Dragon post-insertion, the team at SpaceX exhibited the ingenious engineering tenacity that has become a NASA hallmark, and further demonstrated the industry's readiness to perform the critical task of cargo delivery to low Earth orbit," Michael Lopez-Alegria, a former NASA astronaut and station commander who is now president of the Commercial Spaceflight Federation, said in a statement. "Congratulations to SpaceX and NASA for the successful berthing of Dragon this morning; I look forward to seeing Dragon back on Earth."

The Dragon space capsule is packed with 1,200 pounds (544 kilograms) for the International Space Station, a haul that includes fresh food, science experiments and other vital equipment. The capsule is also carrying two grapple bars for the station's exterior inside an unpressurized "trunk" — a storage compartment in a cylindrical section of the spacecraft below its re-entry capsule. [How SpaceX's Dragon  Capsule Works (Infographic)]

This is SpaceX's third flight to the space station and second official cargo delivery under a $1.6 billion deal with NASA for resupply flights. Under that contract, the company has agreed to provide at least 12 Dragon supply flights to the space station. The Hawthorne, Calif.-based firm was founded in 2002 by billionaire entrepreneur Elon Musk to develop commerical rockets and spacecraft.

"I remember exactly where I was the very first time I ever heard of this scheme …when I was a young astronaut, and I said, 'We're going to do what?'" Ford told Mission Control during the docking operation. "That was when it was an idea and now it is starting to become routine. "

SpaceX launched its first Dragon to the space station last May during a demonstration flight, and followed that success with an official cargo delivery in October.

NASA has a similar cargo delivery deal with the Virginia-based Orbital Sciences Corp., which will use its new Cygnus spacecraft and Antares rocket to launch eight cargo missions under a $1.9 billion contract. The first Antares and Cygnus test flights are expected later this year.

With the space shuttle fleet retired, NASA is relying on private spacecraft like SpaceX's Dragon capsules to fly cargo — and ultimately astronauts — to the International Space Station. Currently, NASA is dependent on Russia's Soyuz spacecraft to launch American astronauts into space.

SpaceX is one of four companies developing manned spacecraft under NASA's commercial crew program. Its manned spacecraft is an enhanced version of the Dragon spacecraft designed to fly seven people to the station and return them to Earth at mission's end.

Unlike the unmanned Russian, European and Japanese cargo spacecraft that serve the space station, SpaceX's Dragon capsules have a heat shield that allows them to re-enter Earth's atmosphere to return science experiments and other gear. This Dragon is expected to return about 2,700 pounds (1,210 kg) of gear to Earth for NASA when it splashes down in the Pacific Ocean off the coast of Baja California.

This story, originally published at 9:20 a.m. ET, was updated at 2:46 p.m. ET to include new details about the station crew's ingress into the Dragon spacecraft.