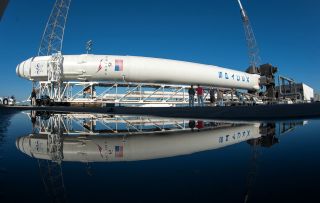 SpaceX's Falcon 9 rocket and Dragon capsule roll out from the hangar for the CRS-2 launch to the International Space Station to deliver NASA cargo in March 2013.
(Image: © SpaceX, Ben Cooper)

A SpaceX Falcon 9 rocket will launch the Dragon capsule toward the space station from the Cape Canaveral Air Force Station here in Florida. Liftoff is set for 10:10 a.m. ET (1510 GMT).

You can  watch SpaceX launch its Dragon capsule in this webcast on SPACE.com, courtesy of NASA, beginning at 8:30 a.m. EST (1330 GMT).

SpaceX officials said they are eager to see the Dragon space capsule make its second cargo run to the International Space Station.

SpaceX has a $1.6 billion contract with NASA to provide at least12 unmanned cargo missions to the space station as part of the agency's Commercial Resupply Services program. The company launched the first mission under that contract, as well as a separate demonstration flight, to the station in 2012. [6 Fun Facts About SpaceX]

The Hawthorne, Calif.-based  SpaceX (the name is short for Space Exploration Technologies) was founded in 2002 billionaire entrepreneur Elon Musk to develop new commercial rockets and spacecraft. The Falcon 9 rockets are named after the fictional Millennium Falcon spaceship from "Star Wars," while the Dragon capsules are named for "Puff the Magic Dragon," Musk has said.

For today's launch, the Dragon spacecraft has been packed with about 1,200 pounds of supplies for the International Space Station's six-man crew. It is due to arrive at the space station early Saturday (March 2) and be captured by astronauts using the outpost's robotic arm and parked at an open docking port.

Included among the Dragon capsule's cargo are new science experiments for the space station's crew, as well as the music single "Up in the Air" by the American rock band Thirty Minutes to Mars for NASA astronaut Thomas Marshburn, a flight engineer on the station. SpaceX also packed some tasty treats for the station crew picked from the orchard of a SpaceX employee's father, Shotwell said.

Shotwell said SpaceX has taken every precaution to assure that today's launch will not experience a repeat of the engine problem that shut down one of the nine Merlin rocket engines on a Falcon 9 that launched the firm's first Dragon cargo mission last October. A "material flaw" in the engine's jacket went undetected before launch caused the anomaly, she added.

"We did extensive analysis, obviously, to understand the problem," Shotwell said. "Extensive testing on these particular engines."

NASA officials are also confident in SpaceX's ability to fly safely and efficiently to the station.

"We felt the risks we were accepting with this flight were the same as we'd accepted with the other flight," said Mike Suffredini, the manager of the International Space Station program office at Johnson Space Center in Houston.

Although sweeping budget cuts, dubbed the sequester, are set to go into effect today, the cuts will not affect the launch or the company in the short term, Shotwell said.

The space station program should also go untouched by the sequester, Suffredini said.

"From an ISS program perspective, we don't have plans to change anything," Suffredini explained.

Once the Dragon spacecraft's mission reaches its end on March 25, it will be detached from its berth and released into space. The capsule is then expected to re-enter Earth's atmosphere and splash down in the Pacific Ocean off the coast of Baja California.

The return to Earth will ferry about 2,300 pounds (1,043 kg) of cargo back to Earth for NASA, agency officials said. This will be SpaceX's third flight to the orbiting laboratory after a test flight in May 2012 and the company's first official cargo mission in October 2012.

NASA is contracting private spaceflight companies like SpaceX to help ferry supplies to and from the space station as a way to fill the void left by the retirement of the agency's space shuttle program. The agency also awarded $1.9 billion to Orbital Sciences Corp. for eight missions using the company's Antares rocket and Cygnus spacecraft.

SpaceX is one of four companies also developing manned spacecraft in the hopes of launching American astronauts to the International Space Station for NASA. After the space shuttle fleet's retirement in 2011, NASA has been dependent on Russia's Soyuz spacecraft to ferry astronauts to and from the space station.