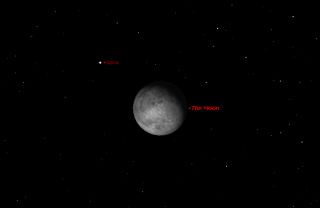 A close-up view of the night sky on March 1 at 1 a.m. shows the waxing gibbous moon and the star Spica making a close pass.
(Image: © Starry Night Software)

Pay close attention to the rising waxing gibbous moon tonight (Feb. 28), and if you live anywhere in the western hemisphere, you'll be able to watch an excellent demonstration of the movement of the moon in its orbit around the Earth.

Normally we see the moon rise in the east and then move across the sky, reaching its highest point in the south before descending down toward the western horizon. Of course, this movement is due to the west-to-east rotation of our Earth. But the moon too is also moving in a west-to-east direction in its orbit against the star background, circling Earth at roughly 2,200 miles an hour (3,500 kilometers per hour), the equivalent of its apparent diameter on the sky. Usually though, we're not aware of that movement during the course of a typical night.

But during an eclipse, when the moon interacts with Earth's shadow, that eastward motion becomes readily apparent. The moon's eastern (left) edge first touches the shadow, and then some minutes later (depending on how deeply the moon plunges into the shadow), it leaves the shadow behind, the last vestige of it disappearing on its western (right) edge.

While it appears that the shadow was creeping over the moon, it was actually the moon moving along in its orbit crossing through the shadow. [Top 10 Cool Moon Facts]

Another way to see the moon's motion through space is to watch when it closely passes a bright star or planet. Such will be the case this evening, when the moon has a close interaction with the bluish first magnitude star, Spica, in the constellation Virgo. Spica is the 16th brightest star in the sky, and soon after the moon comes above the east-southeast horizon at around 9:30 p.m. local time, you'll also see Spica near the moon. What you'll see depends on where you live.

For the eastern United States and Canada, the moon, 87-percent illuminated, will appear above and to the right of Spica as they move up above the horizon. But by 1 a.m. EST (Friday morning, March 1), the gap between them will have narrowed considerably and the moon will now appear just below and to Spica's right; their closest approach to each other.

You should still be able to see Spica with the naked eye, although the moon will be over 100,000 times brighter; you might want to use binoculars to see it better. The moon will then move slowly away from Spica. By 2:15 a.m. it will appear directly underneath the star as they stand almost due south, and as dawn is breaking at around 5 a.m., you'll see the moon will have shifted noticeably below and to Spica's left.

The most dramatic view will be afforded to those living along the Pacific coast of Mexico and Central America as well as a large swath of South America, where the moon will actually pass directly in front of Spica. We could call this an eclipse of a star, though it's more popularly called an occultation.

This map of the moon-Spica occultation zone for 356 locations is available courtesy of IOTA, the International Occultation Timing Association.

Editor's Note: If you take a great photo of the moon and Spica, or any other night sky object that you'd like to share for a possible story or image gallery, send photos, comments and your name and location to managing editor Tariq Malik at spacephotos@space.com.

Joe Rao serves as an instructor and guest lecturer at New York's Hayden Planetarium. He writes about astronomy for The New York Times and other publications, and he is also an on-camera meteorologist for News 12 Westchester, New York. Follow SPACE.com onTwitter @Spacedotcom. We're also on Facebook & Google+.