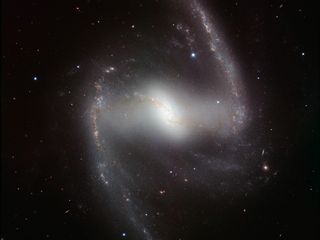 This image of the spiral galaxy NGC 1365 was taken by the powerful HAWK-I infrared camera on ESO’s Very Large Telescope at Paranal Observatory in Chile.
(Image: © ESO/P. Grosbøl)

Astronomers have made the first reliable measurement of a supermassive black hole's spin, showcasing a technique that could help unravel the mysteries of these monsters' growth and evolution.

The enormous black hole at the center of the spiral galaxy NGC 1365 is spinning about 84 percent as fast as Einstein's general theory of relativity allows it to, researchers determined. The find demonstrates that at least some supermassive black holes are rotating rapidly — a claim previous studies had hinted at but failed to confirm.

"It's the first time that we can really say that black holes are spinning," study co-author Fiona Harrison, of Caltech in Pasadena, told SPACE.com. "The promise that this holds for being able to understand how black holes grow is, I think, the major implication."

Staring at a black hole in X-ray light

Supermassive black holes are almost incomprehensibly huge, with some containing 10 billion or more times the mass of our sun. Scientists think one lurks at the heart of most, if not all, galaxies. [Gallery: Black Holes of the Universe]

NGC 1365, located about 56 million light-years from Earth in the constellation Fornax, does indeed harbor a gigantic black hole — one as massive as several million suns. And this behemoth is blasting out enormous quantities of energy as it gobbles up gas and other nearby matter, making it an intriguing target for astronomers.

By zeroing in on high-energy light emitted by iron atoms, the telescopes were able to trace the motion of the flat, rotating accretion disk that circles NGC 1365's black hole and funnels gas and dust into its greedy maw.

Astronomers found that the emissions are strongly distorted, suggesting that the inner edge of the accretion disk may be quite close to the black hole — close enough for gravitational effects to wreak havoc with the X-rays streaming from the disk. This in turn implies a rapidly rotating black hole, since general relativity states that the faster a black hole is spinning, the closer its disk can come to it, Harrison said.

But that's just one interpretation. Another holds that such distortion, which has been observed in accretion disk emissions before, could be caused by clouds of gas that hang between a supermassive black hole and the telescopes observing it. [The Strangest Black Holes in the Universe]

"This has been a big controversy — which of the two is going on?" Harrison said.

Pinning down a black hole's spin

The $165 million NuSTAR telescope, which just launched in June 2012, finally cracked the case.

Using NuSTAR's super-sensitive measurements of high-energy X-rays, the astronomers calculated that the purported gas clouds would have to be incredibly thick to produce the observed distortion levels — so thick as to make the whole idea untenable, at least in the case of NGC 1365's black hole.

"To shine through these thick clouds, the black hole would have to be so bright it would basically blow itself apart," said Harrison, who's principal investigator for the NuSTAR mission. "So what has to be happening is, what we're seeing is these relativistic distortions. And that means that the disk is coming close to the black hole, which means the black hole must be spinning rapidly."

The research team, led by Guido Risaliti of the Harvard-Smithsonian Center for Astrophysics and the Italian National Institute for Astrophysics' Arcetri Observatory, calculated this rotation rate to be 84 percent of that allowed by general relativity.

It's tough to comprehend this figure, since it doesn't translate well into miles per hour. But it's safe to say that the black hole is spinning incredibly fast.

"The analogy of an actual velocity is not quite right," Harrison said. "But what you can say is that spinning black holes twist space-time around them. And if you were standing near the black hole, basically your space-time would be twisted, or dragged, around such that you would have to rotate once every four minutes just to be standing still."

The new study was published online today (Feb. 27) in the journal Nature.

Astronomers think supermassive black holes acquire most of their spin as they grow, rather than being born with it. So studying their rotation rates can yield insights into how these monsters have evolved over time.

The superfast spin of NGC 1365's black hole, for example, implies that it did not grow via numerous small black-hole mergers, Harrison said, since the odds are very low that many such chaotic events would spin it up in the same direction.

Rather, it's more likely that NGC 1365's central black hole acquired its spin from one major merger, or simply by gobbling material from an accretion disk that has remained stable over the long haul.

The new study represents a first step toward a better understanding of the nature and evolution of supermassive black holes, Harrison said.

"We will make more measurements like this," she said. "Eventually what you'd like to do is have a bigger telescope that can actually measure more distant black holes so we can, using the statistics of the sample, understand how they grow over cosmic time."