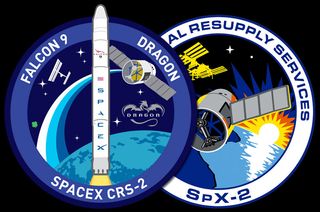 The second of NASA's contracted cargo flights to resupply the International Space Station (ISS) is set to launch later this week, and like most spaceflights, it has its own mission patch.

In fact, it has two.

The dual designs underscore the commercial nature of the unmanned mission, which uses a rocket and a spacecraft built and operated by Space Exploration Technologies, or SpaceX, under a contract with NASA. SpaceX is headed by Elon Musk, co-founder of PayPal and Tesla Motors.

Both the Hawthorne, Calif.-based company and NASA have designed their own emblems to represent the flight, which is scheduled to launch on Friday (March 1) at 10:10 a.m. EST (1510 GMT) from Complex 40 at the Cape Canaveral Air Force Station in Florida. [How SpaceX's  Capsule Works (Infographic)]

The mission will deliver 1,268 pounds (575 kilograms) of crew supplies and science equipment to the space station packed aboard SpaceX's third Dragon capsule to visit the orbiting laboratory. The gumdrop-shaped freighter will ride to orbit atop a SpaceX Falcon 9 rocket.

Almost a month later, on March 25, the Dragon will return to a parachute-assisted ocean splashdown, repacked with 2,668 pounds of science experiment results and no-longer-needed hardware.

The mission will be the second to launch under NASA's Commercial Resupply Services (CRS) program, which in 2008 awarded a $1.6 billion contract to SpaceX to fly 12 Dragon cargo capsules to and from the station. The Virginia-based firm Orbital Sciences was also contracted by the space agency for cargo delivery flights using its Cygnus craft.

NASA's patch for SpX-2 — the mission designation that appears on the agency's emblem — centers on SpaceX's Dragon as it nears a rendezvous with the space station from below. On the insignia, the sun shines brightly in the distance as it rises over Earth's horizon.

SpaceX's patch, which is labeled CRS-2, also includes the Dragon and space station orbiting over Earth, but its central design element is the company's Falcon 9 rocket. The sun is not to be seen, but several more stars are in the sky, including one that is four-pointed and green — a "lucky" four-leaf clover that has become a staple on all of SpaceX's mission patches since its first successful Falcon launch in 2008.

Both emblems depict the Dragon from behind, highlighting one of the ways that this mission differs from past flights. For the first time, the Dragon's unpressurized trunk will be used to carry equipment to the space station. Two grapple fixtures, or bars, will be brought to the orbiting complex to assist astronauts with future repairs to the space station's thermal control system.

The pair of heat rejection subsystem grapple fixtures can be seen on the patches as they are on the real spacecraft, mounted inside the Dragon's open-ended rear section.

The CRS-2 (SpX-2) mission is not the first flight to have two separate patches. Among many others, SpaceX and NASA also created individual emblems for the company's first two flights to the space station in May and October 2012.

The station's crew members, who will grab the Dragon with the outpost's robotic arm to link it to the station, and will work to empty the capsule — also have multiple mission patches. In addition to the emblems representing their two overlapping station expeditions, they also have a patch for the Russian Soyuz aboard which they launched to space and will later land on when they return to Earth.

As the Dragon flies without astronauts — at least for now; NASA has separately contracted SpaceX to further develop the spacecraft into a crew-carrying space taxi as well — there isn't a concern about which patch needs to be sewn on a spacesuit or other crew gear. The multiple mission patches for CRS-2 (SpX-2) are primarily for the benefit of the separate SpaceX and NASA teams on the ground.

But that does not mean one or both of the CRS-2 (SpX-2) mission patches won't also launch into space. For CRS-1 (SpX-1), NASA packed in the mission's Official Flight Kit a number of embroidered emblems as mementos for distribution after the capsule safely splashed down.

According to SpaceX, none of its patches made it onboard that same mission, but previous Dragon missions did fly to space with the company's emblems.