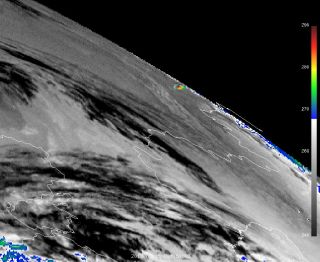 The meteor that exploded over Russia's Ural Mountains early this morning (Feb. 15) was spotted from space by a weather satellite as the space rock streaked through the atmosphere and exploded.

The photos were captured by the satellite Meteosat-9 as the meteor entered Earth's atmosphere , causing a sonic boom and injuring hundreds in the Chelyabinsk region of Russia, about 930 miles (1,500 kilometers) east of Moscow.

A joint venture of the European Space Agency and the European Organization for the Exploitation of Meteorological Satellites Meteosat-9 was launched in 2005 to keep watch on Earth's weather from space. The satellite also took video of the fireball.

Residents aboard the International Space Station weren't able to see the meteor explosion from the station's vantage point.

"We weren't in a position o be able to see that meteor do all that damage in Russia," Canadian astronaut Chris Hadfield said earlier today during a question and answer session held by the University of Waterloo in Canada.

According to NASA experts, the meteor was brighter than the sun when it fell into the atmosphere, and remained visible for about 30 seconds.

The meteor explosion is not related to today's close flyby of asteroid 2012 DA14  , NASA scientists say.