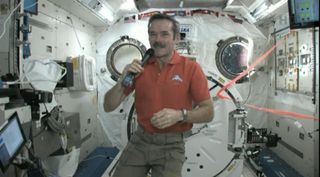 Captain James Kirk of the Starship Enterprise called up an astronaut in space today for a cosmic conversation that began on Twitter and warped all the way into space.

"I'm so moved to be able to speak to you for this brief moment," Shatner told the astronaut via phone.

You can see a video of Shatner's call to the space station here.

Hadfield, representing the Canadian Space Agency, is serving a five-month tour on the football field-sized space station orbiting Earth. Last month, he and Shatner struck up a virtual conversation on Twitter when the actor wrote, "@Cmdr_Hadfield Are you tweeting from space?"

Today, Shatner and Hadfield connected in real time for a chat about life in space, and life on the stage.

"You've been a test pilot, the utmost example of courage," Shatner said. "How do you deal with the fear, which is also applicable to space?"

"I read somewhere that you always knew your lines whenever you had a job in the acting profession," Hadfield replied. "I have tried to always know my lines. What I'm scared most of is not knowing what to do next … After years of training, you practice everything down to the details so you have the confidence that comes with that."

"The fear comes from something unexpected happening, like forgetting your worlds or an audience reaction that was unexpected," Shatner said. "In my case, your face flushes, in your case, you burn up. It's a little different."

"Well, in both cases you go down in flames," the astronaut shot back.

Shatner also got philosophical, asking whether flying in space helped Hadfield contemplate the enormity of the universe. "Are you able to see the unifying parts of it so that you become at one with the universe?" he asked.

Hadfield said that in between the everyday engineering problems that occupy his mind, he does think about how humanity is poised on the cusp of exploration, looking toward a future of living out in the solar system.

"I feel hugely connected to that," he said. "It's what inspired me as a kid. Now I'm doing my absolute best to help people see that, to help us understand where we are philosophically and historically in our increased understanding of where we are in the universe."

The fictional and real-life space travelers had a lot to talk about, but limited time, so the two made plans to continue their conversation at Hadfield's cottage in Ontario, after the astronaut returns home in May.

"It's a pleasure Chris, I look forward to meeting you in person and siting down with a whiskey and a cigar," Shatner said.