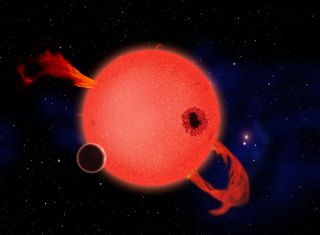 When it's young, a red dwarf star frequently erupts with strong ultraviolet flares as shown in this artist's conception. Some have argued that life would be impossible on any planet orbiting in the star's habitable zone as a result. However, the planet's atmosphere could protect the surface, and in fact such stresses could help life to evolve. And when the star ages and settles down, its planet would enjoy billions of years of quiet, steady radiance. Image released Feb. 6, 2013.
(Image: © David A. Aguilar (CfA))

An Earth-like alien planet may reside right in our solar system's backyard, just 13 light-years or so away, astronomers announced today (Feb. 6).

That number is just an estimate, though, and not based on an exoplanet discovery.

The researchers used data from NASA's prolific planet-hunting Kepler space telescope, which is staring at more than 150,000 stars simultaneously. Kepler detects planets by measuring the temporary brightness dips caused when the worlds pass in front of, or transit, their stars' faces from the instrument's perspective.

The team pulled out a sample of 3,897 red dwarfs — stars dimmer and smaller than our own sun — and determined that Kepler has identified 95 exoplanet candidates circling them. Three of these candidates are roughly Earth-size and orbit within their stars' "Goldilocks zone," where liquid water (and possibly life as we know it) can exist. ['Alien Earths' Should Orbit Nearby Stars (Video)]

Kepler isn't able to detect every planet circling every star that it's watching, researchers noted. Many worlds don't orbit in the right plane for Kepler to observe transits, and the signals of others may be masked by brightness variations inherent to red dwarfs.

Taking this into account, about 6 percent of red dwarfs in the Milky Way galaxy should host Earth-like planets, the astronomers said.

Since about 75 percent of the galaxy's 100 billion stars are red dwarfs, this translates to an estimated 4.5 billion "alien Earths" spread throughout the galaxy. The research team stressed, however, that this is a tentative figure because the distribution of stars varies widely.

Within 30 light-years of our sun, there are 248 red dwarfs, according to separate surveys conducted by the Research Consortium on Nearby Stars, an international astronomical group led by Georgia State University.

In the new study, the research team used this information to find out how far from Earth we need to go to find planets like our own.

"It should be, hopefully, within 13 light-years," lead author Courtney Dressing, of the Harvard-Smithsonian Center for Astrophysics, said during a press conference today.

If the Milky Way galaxy were the size of the United States, 13 light-years would be the equivalent of taking a stroll across New York City's Central Park, she added.

The estimated distance increases to 21 light-years when scientists apply the standard 95 percent confidence interval to their calculation.

The closest red dwarf to Earth is Proxima Centauri, which is 4.2 light-years away in the three-star Alpha Centauri system.

Last October, scientists announced the discovery of an Earth-size (though hellishly hot) planet orbiting Alpha Centauri Bb, another star in the system. No worlds have been detected around Proxima Centauri yet.