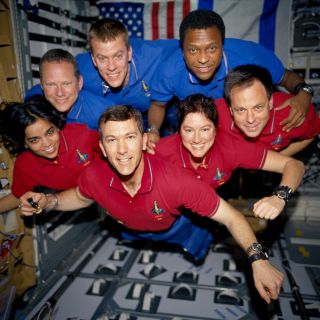 Tuesday, February 1, 2011: During the STS-107 mission, the crew appears to fly toward the camera in a group photo aboard the Space Shuttle Columbia. On the bottom row (L to R) are astronauts Kalpana Chawla, mission specialist; Rick D. Husband, mission commander; Laurel B. Clark, mission specialist; and Ilan Ramon, payload specialist. In the top row (L to R) are astronauts David M. Brown, mission specialist; William C. McCool, pilot; and Michael P. Anderson, payload commander. On February 1, 2003, during re-entry, the Space Shuttle Columbia disintegrated over northern Texas with all seven crewmembers aboard. This picture survived on a roll of unprocessed film recovered by searchers from the debris.
(Image: © NASA)

Here is the complete collection of stories, image galleries and multimedia files from SPACE.com about shuttle Columbia's STS-107 science research mission from pre-launch through the pre-landing check on Jan. 31, 2003. For SPACE.com's collection of disaster stories, please see this page.

Columbia's Astronauts Find Small Miracles of Life and Light
Shuttle Columbia's astronauts have stars in their eyes. When asked Wednesday to talk about amazing moments during the shuttles 16-day mission, which ends this weekend, Kalpana Chawla described an unusual sight.

Shuttle Columbia's Science Mission Passes Half-Way Mark in Good Shape
As shuttle Columbia's 16-day research mission passes the half-way mark, the vast majority of the planned work aboard the orbiting laboratory is getting done despite a persistent problem dealing with slightly warmer temperatures in the Spacehab module.

Shuttle Columbia's Astronauts Burn Up the Record Books
A trio of new records were burned into the history books this week during shuttle Columbia's marathon research mission, officials said Thursday.

Would a Rose Aboard Shuttle Columbia Smell as Sweet?
Scientists are hoping the sweet smell of success doesn't turn sour aboard shuttle Columbia.

Shuttle Columbia Crew Doing Well, Studies Calcium Loss
Three days into shuttle Columbia's 16-day venture in space the crew is reporting that all is well with their marathon science mission.

Mission Columbia: Cancer Tumors Growing Strong in Space
One day after launch into Earth orbit shuttle Columbia and its seven-member flight crew have settled into a routine of around-the-clock research, and already some of the dozens of science experiments are producing results.

Mission Columbia: Marathon Science Mission Begins
Shuttle Columbia safely flew into Earth orbit Thursday, the start of a marathon 16-day mission in which seven astronauts will work around the clock in the name of science.

Mission Columbia: Make a Buck, Make a Buck — Even in Space It's the Same
Finding profits in space remains as elusive as inventing a cure for the common cold, but if ever those two miracles do occur it's possible that SpaceHab will be where it happens.

Mission Columbia: The Long and Winding Road to Space
More than two years after they were assigned, the crew of shuttle Columbia is finally lined up on the field and ready for the opening kickoff Thursday of a 16-day science research mission.