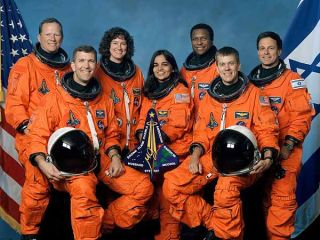 "So far, one crack, similar in size to cracks found on Atlantis and Discovery, has been confirmed in one flow liner in a liquid hydrogen line on Columbia," said NASA spokesman Bruce Buckingham.

The revelation is sure to further delay Columbia's launch on a 16-day science research mission and trigger major changes in the timing of future shuttle missions to the International Space Station.

"Several teams across the country continue to investigate all aspects of the flow liner issue," Buckingham said. "No further results from those teams analyzing the issue are anticipated before next week at the earliest."

Columbia was targeted to fly July 19. Station assembly flights by Atlantis and Endeavour were tentatively set for August and October, respectively.

The crack was found on the surface of metal liners that are welded within the pipes that carry liquid hydrogen and liquid oxygen from the external tank to feed the main engines.

The liners direct the flow of propellant past accordion-shaped bellows, which are built into the plumbing at various locations to allow the pipes to be flexible as they contract and expand when exposed to different temperatures.

Of the dozen liners inspected in each of Atlantis and Discovery, one liner in each orbiter had three cracks measuring one-tenth to three-tenths of an inch (2.5 to 7.6 millimeters).

There was some hope that Columbia's liners would not have the same problem because they were made from stainless steel. Liners in later space shuttles used inconel, a more modern metal alloy.

Endeavour's plumbing will be inspected soon, as well. The shuttle was returned to Kennedy Space Center on Saturday and has since been removed from the back of its 747 carrier jet and towed to an orbiter hangar.

Workers on Tuesday were removing the shuttle's tailcone that covers the main enginers to protect the powerplants and streamline the airflow during the cross-country ferry flight.