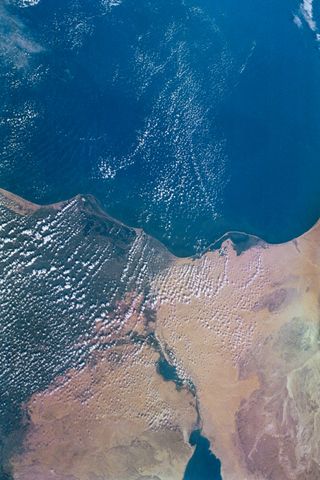 This view featuring the southeastern Mediterranean and Egyptian/Sinai Peninsula border was photographed by an STS-107 crewmember onboard the Space Shuttle Columbia.
(Image: © NASA)

With the shuttle crew split into two shifts, it was the Red Team of commander Rick Husband, mission specialists Kalpana Chawla and Laurel Clark and Israeli astronaut Ilan Ramon who were awake when Mission Control in Houston arranged to have the two crews speak with each other.

"Hey Alpha, this is Columbia, how you doing over there?" Husband replied with a smile.

"We're doing great. We're so glad to see you guys made it into orbit," said Bowersox with a reference to the many months the STS-107 science mission waited to launch.

"We're glad to be here too," Husband said. "We're really excited to be able to talk to you guys, one space lab to another big old space lab on that beautiful station of yours."

At the time of the conversation Columbia was northeast of Brazil over the South Atlantic Ocean while the station was over the eastern area of Ukraine, north of the Black Sea.

The two vehicles are in very different orbits, in no danger of collision, but they have come close enough for Husband to have spotted the station once. The ISS crew have not seen the shuttle but were hopeful they would get a chance before Columbia lands on Saturday.

Bowersox and Expedition Six science office Don Pettit and Soyuz commander Nikolai Budarin were launched into orbit in November and are set to return to Earth in March. They told Columbia's crew they were doing great.

"I tell you it's certainly an amazing place to live and to work," Pettit said.

The conversation lasted just a few minutes, and then following a flurry of well wishes the two crews returned to work.

For Columbia's Red Team that meant wrestling with a new experiment that uses the combustion module to snuff out fires instead of ignite them.

Unfortunately the initial set up leaked water and delayed the start of the study that is to investigate the use of a fine mist to extinguish flames in space.

Although managers later expressed optimism the trouble would be quickly solved, the problems persisted into the late afternoon and Mission Control told the crew they would need a few more hours to come up with a recovery plan, probably delaying the experiment's first run to the overnight Blue Team shift.

Other experiments continued without incident, including a number of studies related to the human body's adaptation to the space environment. As part of those studies the crew swallowed tracer pills and injected fluids into each other, as well as continued collecting urine, blood and saliva samples.

Meanwhile, mission officials say the Columbia crew has no formal plans to recognize Tuesday's anniversary of the Challenger disaster.

It was 17 years ago on Jan. 28, 1986 that Dick Scobee, Mike Smith, Elison Onizuka, Judy Resnik, Ron McNair, Greg Jarvis and Christa McAuliffe were lost when Challenger was destroyed in NASA's worst spaceflight accident.

"These were our friends that lived down the hall from us in our offices here. They were heroes everyday to us. This was our job, our life and our career, and there was a lot of uncertainty for all of us as to what this was going to mean," said mission operations manager Phil Engelauf.

Engelauf said there would be informal remembrances of the Challenger crew in Houston on Tuesday, as well as others who have lost their lives in space -- including the Apollo 1 crew of Gus Grissom, Ed White and Roger Chaffee, who lost their lives in a spacecraft fire on Jan. 27, 1967.

Engelauf recalled how he and his colleagues felt the day Challenger and its crew were lost.

"Within a pretty short period of time, I mean within hours, I think people had adjusted to a state of optimism that we were going to go find out what happened and pick up and carry on," Engelauf said.

"Seventeen years later here, it's kind of nice to see that we in fact did that and picked up with that legacy, and are here today with a space station occupied 365 days a year and an independent shuttle program serving both the station and the broader science community and the objectives that all those people stood for."