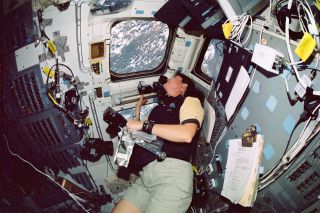 Astronaut Laurel B. Clark, STS-107 mission specialist, looks through an overhead window on the aft flight deck of the Space Shuttle Columbia. On Feb. 1, 2003, the seven crewmembers were lost with the Space Shuttle Columbia over North Texas. This picture was on a roll of unprocessed film later recovered by searchers from the debris.
(Image: © NASA)

When asked Wednesday to talk about amazing moments during the shuttles 16-day mission, which ends this weekend, Kalpana Chawla  described an unusual sight.

From the orbiters flight deck, as a sunset overtook the view, she began to see her own reflection in the overhead windows, along with the bright and dark sides of the Earth.

"In the retina of my eye, the whole Earth and the sky could be seen reflected," she said Wednesday. "So I called all the crew members one by one, and they saw it, and everybody said, Oh, wow!"

On a science mission of incremental successes and quiet labor, without glamorous spacewalks or a space-station visit, the crew has found much to regard with wonder.

Laurel Clark sees small miracles in the living creatures on board, such as the day when she had to videotape flowers in a commercial fragrance experiment. "There were roses in there, and they had been buds, and they had opened up to bloom," she said, "and it was so, so magical to have roses growing in our laboratory in space."

In a student experiment, she saw a moth newly hatched from a silkworm. "It was just starting to puff its wings up so that it would be able to fly," Clark said, "and life continues in lots of places, and life is a magical thing."

Pilot Willie McCool is enjoying maneuvering the orbiter so it can have different views for experiments.

"Ive had the opportunity to be on the flight deck probably more than most of my crewmates to look outside and really soak up the sunrises and sunsets, the moonrises and moonsets, the views of the Himalayas, Australia, all the continents," he said.

Ilan Ramon, the first Israeli astronaut, cited his wishes for peace in his country as he praised the international nature of research taking place on the orbiter, including work by Arab scientists.

"The world looks marvelous from up here, so peaceful, so wonderful and so fragile," Ramon said. "The atmosphere is so thin and fragile, and I think everybody, all of us ... have to keep it clean and good. It saves our life and gives our life."

After a week in orbit, he finally got to observe a large dust storm over the Atlantic Ocean with the Israeli experiment he is monitoring. The results could help illuminate the influence of tiny dust particles on climate in the Mideast and around the world.

Ramon, a secular Jew, hasnt made time yet to mark the Sabbath, but he is eating NASA-provided kosher food. "My crewmates share with me and love it," he said.

There are four rookies on this flight - Clark, McCool, Ramon and Dave Brown.

"They acted like theyd been here before when they got to main engine cutoff, and the crew has performed just marvelously," Commander Rick Husband said, "and I really love seeing a team come together."

Brown was a college gymnast and, briefly, a circus acrobat before becoming a Navy pilot and flight surgeon.

"I got to do some backflips here in the center of the module," he said from the Spacehab research lab. "Its big enough to do that. And that was quite a bit of fun."

A lot of the science experiments are preludes to work to be done on the International Space Station , payload commander Michael Anderson said.

"The science were doing here is great, and its fantastic, its leading edge," he said, "but I think once we get a seven-member crew on board the space station, youre really going to see some outstanding science in space."

Columbia  is due to land at Kennedy Space Center Saturday morning.