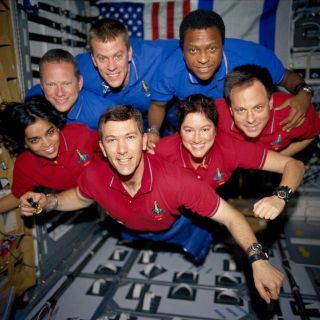 Following 16 days of intense, around-the-clock science research the seven-member Columbia  crew on Friday shut down experiments, packed up their gear and ran tests of the systems they'll need for Saturday's planned landing.

Touchdown at the Kennedy Space Center is scheduled for 9:16 a.m. EST (1416 GMT) and the weather forecast looks good.

"This has been a very successful mission," space shuttle  flight director Leroy Cain said Friday. "Fair to say that it's far exceeded folks' expectations from a science standpoint, so we're very pleased."

Cain said he's also happy with the shuttle, which passed all of its routine pre-landing checks of its steering thrusters, hydraulics and other systems critical to the re-entry procedure.

"We had no problems, the vehicle performed flawlessly today, as it has the entire mission," Cain said.

One concern discussed Thursday involved the fragile heat protection tiles that cover much of the shuttle's surface and protects the vehicle and crew from the high temperatures created during re-entry.

Video of the Jan. 16 launch from Florida shows what is likely a piece of insulating foam falling away from Columbia's external tank and striking the space plane's left wing near its leading edge, possibly damaging some tiles.

Cain said engineers have studied the situation and are not worried.

"We took a very thorough look at the situation with the tile on the left wing and we have no concerns, whatsoever," Cain said. "Therefore we haven't changed anything with respect to our trajectory design."

Saturday's landing preparations will begin at 4:18 a.m. EST (0918 GMT) as the crew begins working through their de-orbit checklist. That will be followed by closing Columbia's payload bay doors at 5:35 a.m. EST (1035 GMT).

If all continues to go well and the weather cooperates, Cain will tell STS-107 commander Rick Husband to bring everybody home and fire the shuttle's braking rockets at 8:15 a.m. EST.

That will set up an hour-long, hypersonic dive through Earth's atmosphere, leading to a touchdown on runway 33 at KSC.

Columbia is expected to make landfall over the San Francisco area about 8:55 a.m. EST (1355 GMT) with the shuttle well inside the atmosphere and burning bright with a long streak of plasma trailing behind.

"This will be a very good visual sighting for folks particularly on the West Coast, as well as in mid Arizona, New Mexico area," Cain said. "It should be a pretty spectacular event for folks that have never seen a shuttle sighting, particularly at night."

Columbia's return with first-time Israeli astronaut Ilan Ramon will be greeted by tight security and a full contingent of scientists who will be on hand to claim their experiments, as well as to conduct post-flight medical studies on the seven astronauts.