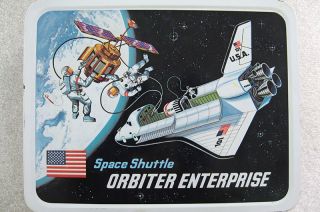 This space shuttle Enterprise lunchbox, circa 1977, is among the pop culture artifacts going on display at the Intrepid Sea, Air and Space Museum as part of a new Enterprise exhibition.
(Image: © Intrepid)

NEW YORK — A new museum exhibit that reveals the history of NASA's original space shuttle is opening in New York City this week, just as the prototype orbiter is being put under cover.

The exhibit "Space Shuttle Enterprise: A Pioneer," which explores the history of Enterprise and its role in NASA's development of the space shuttle, will debut to the public on Thursday (Jan. 17) at the Intrepid Sea, Air and Space Museum in Manhattan.

The temporary display is hosted on the hangar deck of the converted U.S.S. Intrepid, a World War II aircraft carrier. The exhibit celebrates the people, the pilots and engineers who contributed to the orbiter's story, as well as made the technological innovations that helped to make Enterprise an icon of the space program.

The icon itself, the Enterprise, is mounted on the Intrepid's flight deck. The retired prototype orbiter, which never flew in space but was used for a series of critical approach and landing tests in the 1970s, entered the Intrepid's collection in July 2012. In October, Hurricane Sandy left the shuttle with minor damage and destroyed its display pavilion.

Scaffolding has now been raised around Enterprise and a protective cover will be placed over the orbiter this week. The Intrepid is planning to reopen its shuttle pavilion in the spring.

Until then, the new exhibition has been installed to provide visitors the chance to learn more about the historic winged spacecraft. [Space Shuttle Enterprise's Legacy (Photos)]

"While the shuttle itself is not on display, we really want to give the public what they want and what they appear to want is really interesting stories about the shuttle and new elements as well," Elaine Charnov, Intrepid museum's vice president for exhibits, told collectSPACE.com in an interview.

From the cockpit to the cafeteria

"Space Shuttle Enterprise: A Pioneer" introduces visitors to the Enterprise with artifacts from its era — including wind tunnel test models and examples of where Enterprise crossed into pop culture — as well as archival images and video clips to illustrate the history and significance of the prototype orbiter.

"One of the highlights is the cockpit instrumentation panel, which gives the public a much richer and deeper sense of what the instrumentation looks like and how large that area was [on Enterprise]," Charnov said. "How remarkable it was that these instruments really helped facilitate so many pioneering space efforts."

The display, which is built into a full scale replica of the forward instrument panel from inside the shuttle's flight deck, provides an answer to one of the popular questions visitors have been asking since Enterprise first arrived on display at the Intrepid.

"We get a lot of questions from people, 'How can we see the cockpit?'" explained Eric Boehm, the Intrepid's curator of aviation and aircraft restoration. "Future plans include a much more enhanced version of this but in the short term we are getting these instruments on display as soon as possible." [Space Shuttle Enterprise NYC Exhibit (Video)]

Enterprise arrived in New York City with its cockpit mostly bare. The instrumentation going on display was obtained by the Intrepid through a government surplus sale.

"They could have flown on Enterprise but they may have been repurposed for a simulator at one time," Boehm said. "There are some tags on them that date them back to that era, but the way that NASA worked, they repurposed stuff all the time."

"We're not going to sell [the display] as actual Enterprise instruments, but boy, it is highly likely that these came off Enterprise," he added.

On the subject of selling, another area of the exhibit picks up where the original pavilion's displays left off: the space shuttle Enterprise's crossover into pop culture.

"Expanding what was presented in the original pavilion, we now have a chance to show some of the actual elements," Charnov said. "It includes a 1977 Enterprise lunchbox and thermos. Who wouldn't want to have that as a collectible?"

Other artifacts on display include model kits, print ads that incorporated imagery of Enterprise, and the White House briefing document that led to the prototype shuttle being renamed after the starship from "Star Trek" rather than the U.S.S. Constitution, as NASA originally planned.

"[The new exhibit] really illustrates how deeply woven the Enterprise and the shuttle's story was into daily life and how it was reflected in so many aspects of our consumer culture," said Charnov.

One other area of the 1,500 square-foot exhibition features artifacts from a pilot who shares connections with both the Intrepid and the Enterprise: Richard "Dick" Truly.

"There is a whole case devoted to Dick Truly," Boehm told collectSPACE.com . "Dick Truly has a very special meaning for us because he was assigned to Intrepid as a young naval aviator in the early 1960s. He has over 100 'traps' here on our flight deck."

One of the four NASA astronauts who flew Enterprise's approach and landing tests in 1977, Truly's initial tour of duty as a naval aviator was flying F-8 Crusaders aboard the U.S.S. Intrepid and the U.S.S. Enterprise. He made over 300 carrier landings, flew the shuttle Enterprise three times (twice in free flight), and then flew twice into space on the shuttles Columbia and Challenger.

"He has been donating stuff to us over the past several years and now it is all coming together," Boehm said.

The exhibition is free, included with the price of admission to the Intrepid. The museum is currently offering a "Gift of Intrepid" buy one, get one free admission ticket promotion to its Facebook and Twitter followers through Feb. 15.

The Intrepid Sea, Air and Space Museum is located at Pier 86 (46th Street and 12th Avenue) in Manhattan.

See collectSPACE.com for a list of the artifacts going on display at the Intrepid Sea, Air and Space Museum as part of "Space Shuttle Enterprise: A Pioneer." See shuttles.collectspace.com for continuing coverage of the delivery and display of NASA's retired space shuttles.