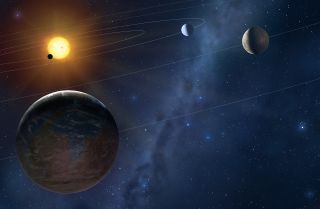 The inner region of an exoplanetary system, where four terrestrial planets orbit a sun-like star.
(Image: © © Mark A. Garlick/space-art.co.uk/University of Warwick)

Almost 3,000 astronomers from around the world gathered in Long Beach, Calif., from Jan. 6-10 to discuss the latest space findings at the 221st meeting of the American Astronomical Society (AAS).

The conference featured major announcements about some of the biggest mysteries of the cosmos, including dark matter, dark energy, alien planets, and more.

Discovery! Most Earth-Like Alien Planet Possibly Found
A possible alien planet discovered by NASA's Kepler space telescope is the most Earth-like world yet detected beyond our solar system, scientists say.

Best Space Discoveries of 221st AAS Meeting
Don’t miss these highlights from the “Super Bowl of Astronomy” in January 2013.

Space Photos from the 221st American Astronomical Society Meeting
See the latest photos from discoveries and presentations at the 221st AAS meeting in Long Beach, Calif., this week.

The Star Explosion That Wasn't: Astronomers Solve 150-Year-Old Mystery
After a stellar explosion was reported in 1866, British astronomer John Herschel announced he had seen a bright flare from the same location 24 years earlier.

Alien Solar System May Exist in Nearby Star Cluster
At 150 light-years from Earth, the Hyades cluster is the nearest star cluster to Earth's solar system and scientists have long wondered if some of those stars are home to alien planets.

NASA's Next Space Telescope Coming Together, Piece by Piece
NASA's James Webb Space Telescope is one of the most intricate and powerful observatories ever devised, and it is slowly coming together for its long-awaited mission.

Scientists See Big Rewards (and Risk) in Private Spaceflight
Private spaceflight should create many opportunities for scientific progress, though risk will have to be minimized for the field to really take off, a panel of experts stressed earlier this month.

NASA's Alien Planet Archive Now Open to the World
Scientists with NASA's planet-hunting Kepler spacecraft have revamped the mission's online archive of alien worlds, opening up the database for the entire world to see.

What Will First Photos of Black Holes Look Like?
A giant black hole is thought to lurk at the center of the Milky Way, but it has never been directly seen. Now astronomers have predicted what the first pictures of this black hole will look like when taken with technology soon to be available.

Hubble Telescope to Snap 6 New 'Deep Field' Views of Universe
The Hubble Space Telescope's iconic "Deep Field" photo wowed the world in 1996 by revealing a huge collection of galaxies hiding inside a patch of the sky that looked like nothing more than blank space. Now NASA plans to image six more "empty" bits of sky for a whole new set of deep fields that could revolutionize astronomy once again.

'Garden Sprinkler' Star Fires Jet at Almost Light Speed
A NASA space telescope has captured a movie of a collapsed star that's spinning more than 11 times each second and unleashing ultra-fast particles that move at 70 percent of the speed of light.

NASA's Donated Spy Telescopes May Aid Dark Energy Search
Astronomers are excited by the possibility of using one of two cast-off spy satellite telescopes gifted to NASA to probe for dark energy.

Have Astronomers Found Chemical Precursor to Life In Gas Clouds?
Astronomers have found tentative traces of a precursor chemical to the building blocks of life near a star-forming region about 1,000 light-years from Earth.

NASA's Next Flagship Space Telescope Back on Track ... and on Budget
NASA's James Webb Space Telescope — the notoriously over-budget new space observatory slated to launch in 2018 — is on time and still within its new budget, the project's chief said Wednesday (Jan. 9).

Night's Bright Lights Dim View for Remote Telescopes
Humans have looked up to the night skies and seen thousands of glittering stars since the dawn of time, but streetlights and illuminated signs have increasingly obscured that majestic view. Now astronomers are saying those lights increasingly pose problems for even the most remote telescopes.

Einstein Was Right: Space-Time Is Smooth, Not Foamy
Space-time is smooth rather than foamy, a new study suggests, scoring a possible victory for the late Albert Einstein over some quantum theorists who came after him.

Finding Another Earth: How Will Scientists Confirm It Exists?
While NASA's planet-hunting Kepler space telescope, which discovered the newfound Earth-like planet candidate KOI 172.2, is great for finding large exoplanets beyond the reaches of our sun, it is not our best bet for recognizing an Earth-twin circling a distant star.

Milky Way Galaxy May Be Less Massive Than Thought
The Milky Way galaxy, home of Earth's solar system, may actually be only half as massive as currently thought, scientists say.

Most Distant 'Standard Candle' Star Explosion Found
Astronomers have discovered the most distant supernova of its kind, an ancient and massive star explosion that could shed light on some of the universe's biggest mysteries.

Alien Earth: What It Will Mean to Find Our Planet's Twin
Finding Earth 2.0 is just a matter of time, and the discovery will likely transform the way we think about our place in the cosmos, astronomer Natalie Batalha said Tuesday (Jan. 8).

'Zombie' Planet's Rogue Orbit Around Star Shocks Scientists
The unbalanced orbit of a so-called "zombie planet" in a dusty star system has astronomers struggling to explain the exoplanet's behavior. New observations of the planet Fomalhaut b revealed the oddball orbit, which has wild extremes between its closest and farthest points from the parent star and appears to cross through a vast minefield of dusty debris.

Astronomers have mapped out the weird and wild weather of a brown dwarf, a so-called "failed star," in unprecedented detail. A dense atmosphere of hot sand is in the forecast.

New 'Bone' in Milky Way Skeleton Discovered
Astronomers have spotted a new component of the Milky Way galaxy's skeleton — a "bone" of dust and gas that contains about as much material as 100,000 suns. The structure is more than 300 light-years long but just 1 or 2 light-years wide, giving it the appearance of a slender cosmic snake.

Iconic Telescopes Threatened by Looming Budget Cuts
With fiscal cliffs, debt ceilings and other financial woes facing the country, several iconic telescopes may lose funding and possibly even close. The National Science Foundation faces several years of stagnating or even shrinking funding, even as the bills for major new telescopes come due.

Ancient Maya Predicted 1991 Solar Eclipse
The Maya, best known these days for the doomsday they never foretold, may have accurately predicted astronomical phenomena centuries ahead of time, scientists find.

NASA Finds 461 Alien Planet Candidates, Some Possibly Habitable
NASA's Kepler Space Telescope has detected 461 new potential alien planets, including four worlds slightly larger than Earth that may be capable of supporting life as we know it.

'Exocomets' Common Across Milky Way Galaxy
Comets may be as common as alien planets in star systems throughout the Milky Way galaxy, scientists say.

Monster Black Hole Burp Surprises Scientists
Astronomers have discovered what appears to be colossal belch from a massive black hole at the heart of a distant galaxy. The outburst was 10 times as bright as the biggest star explosion, scientists say.

Double-Star Systems Can Be Dangerous for Exoplanets
Alien planets born in widely separated two-star systems face a grave danger of being booted into interstellar space, a new study suggests.