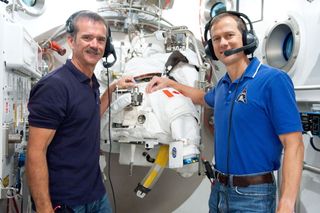 These conditions are risks for any space traveler, but they're also problems facing many seniors living on Earth.

To accelerate scientists'  understanding of how the body ages, Canada's leading space and health agencies are pooling money and researchers, and plan to showcase the results of the research internationally.

The Canadian Space Agency (CSA) will work with the Canadian Institutes of Health Research (CIHR) to examine the medical issues associated with spaceflight and connect them to issues facing regular people on the ground. While researchers have investigated these topics for years, this new effort represents the first inter-agency formal step for Canada. The goal is to develop treatment for Earth-bound seniors.

First spearheaded by the CSA's Nicole Buckley, chief scientist for life sciences, the partnership produced a national workshop in June. In the next couple of years, the Canadians plan to host an international working group to bring in research from NASA, the Japanese Space Agency and other government space stakeholders.

Despite the initiative's youth, Buckley said the CIHR is excited about gaining more access to the station's orbital laboratory, where health research is performed by space residents.

"There's increasing interest in the whole process of aging — pretty soon, we’re all going to be there — and we have this great resource in space that can complement terrestrial research. Why have it in two separate [research] areas?" said Buckley.

New center in the works

Thanks to five decades of human spaceflight, there is already a wealth of information available on how humans react to the microgravity environment. Weightlessness produces negative changes in bones, blood vessels and other parts of body that no longer have to work against gravity.

Several CIHR-funded scientists already receive money from the Canadian Space Agency, with Richard Hughson of the University of Waterloo among the most experienced in that group.

Since the space station's Expedition 15 mission in 2007, astronauts and cosmonauts on station willingly donned sensors and blood cuffs to perform the researcher's experiments. Hughson's latest investigation will take place on Expedition 34, which launches to space Wednesday (Dec. 19). [Expedition 34 in Photos]

"Richard is an example of a crossover scientist — a life scientist that does fabulous space research," Buckley said of Hughson.

Hughson's speciality is aging, and his university is pushing hard to gain world-class speciality expertise in that area. Next spring, the University of Waterloo will break ground on a long-term care facility that will host 192 seniors in its first phase.

The facility — the first of its type worldwide — will open its doors around 2014. Construction will cost $130 million Canadian (U.S. $132 million) over several phases. The first stage includes a privately funded $3 million (U.S. $3.05 million) research center next door.

"It will allow us to test and monitor individuals more in their normal, natural daily setting," Hughson said. While seniors come into his lab regularly for blood pressure and stand tests, by the time they arrive, they've already been up for several hours and their body has adjusted to walking.

"It's not the same as trying to catch someone in their home environment," he said.

Expedition 34 astronauts Chris Hadfield(also a Canadian) and Tom Marshburnwill perform an experiment called Blood Pressure Regulation (BPReg), which is supposed to monitor the risk of fainting. The experiment will take place near the end of their five-month flight, when they are the most adapted to space.

The astronauts will put large blood pressure cuffs on the top parts of their legs, puff the cuffs up for three minutes, and then rapidly release the pressure. This will produce a large rush of blood to the legs, similar to what occurs when one stands up.

Hughson will compare the high-flying results to control experiments that Marshburn and Hadfield do before and after their flight. His aim is to make predictions about what will happen to their blood pressures and heart rates.

His work, called Cardiovascular and Cerebrovascular Control on Return from ISS, shows that strenuous exercisein space likely combats changes in the heart rate.

However, Hughson has intriguing findings about arteries in space, showing that they do harden in similar ways to what occurs with the elderly on Earth. The experiment is called Cardiovascular Health Consequences of Long-Duration Space Flight, or Vascular for short.

As the blood goes through the stiff vessels, it pushes through and creates large pulses of pressure that radiate into the brain artery. A similar process occurs on Earth when collagen builds up in aging people.

"We think — we're still in the thinking stage — what's happening is you damage the brain blood vessels to the extent that you have a reduction in total brain blood flow," Hughson said.

He's now analyzing data from 100 seniors on Earth, collected in the past 2.5 years.

"Our CIHR part of the funding has been looking at a fairly large group of elderly [people] to examine arterial stiffness and blood flow, and now to examine cognitive and motor function to see whether there is a relationship," Hughson said.

To monitor for blood changes in astronauts on the station, the spaceflyers will take samples while still in orbit, then ship them back to Earth. The SpaceX unmanned Dragon flight in October included refrigerated blood for Hughson on its return trip to Earth, he said.

Hughson emphasized that his research is in the early stages, but added the potential for improving senior health is worth the time the astronauts spend on it in space.

"If we can learn something from the astronauts that we can apply back to the population on Earth ... that's really great," he said.