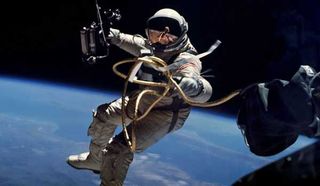 A new study suggests that long-duration space travel can weaken astronauts' bones for a year or more after they return to Earth. Here, astronaut Ed White performs the first American spacewalk during the Gemini 4 mission on June 3, 1965.
(Image: © NASA)

A new study investigated how astronauts'bones compare to those of Earthbound folks over time, and the results are not encouragingfor space travelers.

Scientists have known for years that exposure tomicrogravity rapidlyweakens bones, and the new research shows the effects can last for a yearor more after astronauts return to Earth. The results stress the need to findways to minimize the damage done during spaceflight, researchers said, becausebone recovery on Earth may take a while.

"If we can intervene in space and have crewmembers notlose as much, that would be the best outcome for them," said study leaderShreyasee Amin, an associate professor at the Mayo Clinic in Minnesota.

Amin and her colleagues studied 28 American astronauts ? 24men and four women. Their preflight ages ranged from 36 to 53, and theirmissions in space lasted from 95 to 215 days.

The researchers measured the spaceflyers' bone mineraldensity ? an estimator of bone strength ? before launch, immediately afterlanding and again at various times between six and 18 months following theirreturn to Earth.

For a control, the scientists took similar measurements froma sample of 699 people who had never been to space. By comparing the twodatasets, the team was able to determine what the astronauts' bone density likelywould have been, had they never flown in space.

The team found that some bones remained weak even a yearafter the astronauts landed, despite intensive exercise and rehabilitationregimes. Hip bone mineral density in particular suffered, Amin said, whileother areas, such as the wrist, bounced back faster.

Bones in the hips and legs need to be strong on Earth,because they lug so much weight around on a daily basis. But microgravity freesthem of this burden and they seem to weaken as a result, researchers said.

"The hypothesis has always been that it's the lack ofload-bearing activity in the lower extremities," Amin told SPACE.com."And that seems to be panning out."

The team also found that women suffer less bone loss thanmen over the long haul. But since there were only four female astronauts in thesample, the team isn't sure what to make of this intriguing result yet; they'restill looking at the data.

"There are a few things we need to dice out before wemake any definitive decision that we should only send women to space,"Amin said with a laugh.

Amin and her colleagues will present their results Tuesday,Nov. 9, at the American College of Rheumatology Annual Scientific Meeting inAtlanta.

Previous studies have shown that astronauts' bonemineral density drops by up to 1.8 percent every month they spend in space? a rate comparable or to exceeding the decline senior citizens experience duringa full year on Earth.

The physical toll of space missions is no surprise to NASA.The space agency has long known about the problem, and astronauts routinelytrain hard to stave off the worst effects of bone loss and muscle-wastingin space.

During their six-month stints aboard the International SpaceStation, astronauts exercise about 2 1/2 hours per day, six days a week,officials have said. Spaceflyers ride a stationary bike, run on a treadmill andlift weights using a machine ?installed on the station in November 2008 ? thatgenerates loads using vacuum cylinders. [Gallery:Inside the International Space Station.]

And after they return to Earth, NASA puts crewmembersthrough a customized exercise program that can last up to three months.

These exercise regimes may end up making a big difference,helping astronauts' bones stay strong in orbit. But Amin said her team wouldneed more time to flesh out the effects.

"NASA's been really proactive in trying to find someinterventions and improve their exercise capacity, not just for crewmembers'bones but also their muscles and well-being in general," she said."That may be working. But we don't have sufficient data on this newerexercise equipment that has come up on the station."

The bone-loss results are just the first stage of theresearchers' study. They're continuing their work, looking at bone density twoto four years after landing. And they're trying to identify risk factors thatlead to bone loss and slow recovery, as well as ways that astronauts' healthcan be improved.

The team is integrating information about the astronauts'exercise regimes and biochemical markers that may influence bone loss and ratesof recovery. They're also thinking about other factors that may contribute tobone weakening, such as vitamin D deficiency, Amin said.

The scientists hope that, over time, they can develop solidrecommendations for how to help keep astronauts' bones healthy in space, andperhaps also how to help them recover once they return to Earth. The new studyis a step along that path.

"It's an interesting first step," Amin said."We're interested in working with NASA further to try to come up with someinformation that may help them and the astronauts long-term."