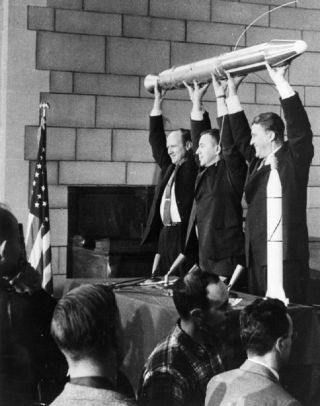 U.S. Explorer 1 in early 1958 discovered the radiation belt around the Earth. Holding a model of the satellite in celebration after its successful orbiting: (left to right) William H. Pickering, former director of JPL, which built and operated the satellite; James A. van Allen, center, of the State University of Iowa, designed and built the instrument on Explorer that detected the radiation that circles Earth; and at right, Wernher von Braun, leader of the Army's Redstone Arsenal team.
(Image: © NASA/JPL)

A leading space scientist has called to question thevalidity of human spaceflight, suggesting that sending astronauts outward from Earthis outdated, too costly, and the science returned is trivial.

The human spaceflight critic is no stranger to space -- infact he's a pioneer in the space science arena from the premier days ofsatellites orbiting Earth.

James van Allen, Regent Distinguished Professor at the University of Iowa, is the noted discoverer ofradiation belts encircling Earth. His seminal finding -- labeled the Van Allenradiation belts -- stemmed from the scientist's experiment that flew on Explorer1, America'sfirst satellite to successfully orbit the Earth back on January 31, 1958.

Van Allen's appraisal of manned space missions -- "Is HumanSpaceflight Obsolete?" -- is carried within the pages of the Summer2004 volume of Issues in Science andTechnology.

The quarterly policy journal is published by the Cecil and Ida Green Center for the Study of Science and Society at the University of Texasat Dallas in cooperation with the NationalAcademy of Sciences in Washington, D.C.

"My position is that it is high time for a calm debate onmore fundamental questions. Does human spaceflight continue to serve acompelling cultural purpose and/or our national interest? Or does humanspaceflight simply have a life of its own, without a realistic objective thatis remotely commensurate with its costs? Or, indeed, is human spaceflight nowobsolete?" van Allen writes.

Van Allen's call for discussion is prompted in part byNASA's grounding of the remaining space shuttle fleet following the Columbia accident, whilethe agency takes steps to improve their safety. Also, the scientist notes thatPresident Bush has put on the table "a far more costly and far more hazardousprogram" to return humans back to the Moon and for sending astronauts to Marsand worlds beyond.

"Almost all of the space program's important advances inscientific knowledge have been accomplished by hundreds of robotic spacecraftin orbit about Earth and on missions to the distant planets Mercury, Venus,Mars, Jupiter, Saturn, Uranus, and Neptune," van Allen writes. Similarly,robotic exploration of comets and asteroids "has truly revolutionized ourknowledge of the solar system," he adds.

Casting an eye on the space shuttle's contribution toscience, van Allen suggests they have been modest, "and its contribution toutilitarian applications of space technology has been insignificant."

The still only partly put together International SpaceStation, van Allen points out, has already garnered a price tag of some $30billion. "If it is actually completed by 2010, after a total lapse of 26 years,the cumulative cost will be at least $80 billion, and the exuberant hopes forits important commercial and scientific achievements will have been all butabandoned," he argues.

For those holding onto the promise of a "spacefaring world",van Allen notes that such a vision is now muted, "represented by a total of twopersons in space -- both in the partially assembled International Space Station-- who have barely enough time to manage the station, never mind conduct any significantresearch."

Van Allen comments that "the only surviving motivation forcontinuing human spaceflight is the ideology of adventure."

At the end of the day, van Allen concludes: "I ask myself whetherthe huge national commitment of technical talent to human spaceflight and theever-present potential for the loss of precious human life are reallyjustifiable."

"Let us not obfuscate the issue with false analogies toChristopher Columbus, Ferdinand Magellan, and Lewis and Clark, or with visionsof establishing a pleasant tourist resort on the planet Mars," van Allensuggests.