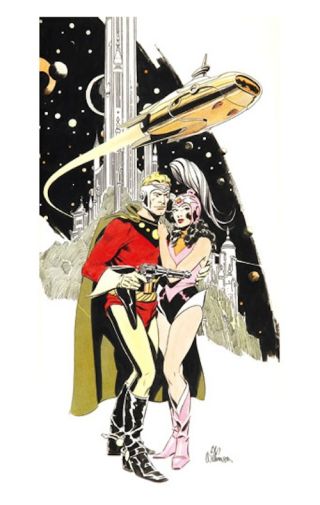 Humankind has always found a source of inspiration in the night sky. Since our earliest days, we've imagined the stars as the homes of gods and monsters, painting a cross-cultural mythology of beings from our wildest imaginings, even giving some of those beings form as constellations.

Some say that superheroes and comic books provide our modern mythology. Just like the stories of our ancient ancestors, many of the gods and monsters that make up this mythos live in the vast expanse of our solar system and beyond.

Here are our five favorite examples of comic book characters with cosmic origins. For the full list of 10, check out: Top Ten Cosmic Superheroes.

It's true that most of Superman's adventures see him defending his home city of Metropolis, but Superman often finds himself exploring the far-flung reaches of other galaxies as well. Stories frequently find the superhero in locations ranging from the region of space where his birth planet, Krypton, once orbited (in the Corvus constellation, near red dwarf LHS 2520, according to Neil Degrasse Tyson), to planets like New Genesis or Apokolips, the twin homes of the New Gods — and to even stranger locations. [Deaths, Rebirths, Reboots: 10 Biggest Superman Changes]

Not much needs to be said about why Superman is an incredible character. As the first superhero ever created, he paved the way for all others, including numerous copycats, and has inspired countless millions of fans all over the world. While his origins on the planet Krypton were not revealed until several years into his nearly 80-year existence, Superman embodies the archetype of the man who fell to Earth, a being of incredible power and purity who comes to our world to show us our own potential.

Over the years, Superman has served as a bridge to bring other disparate characters into the fold of the DC Universe, including the Legion of Super-Heroes, who brought him into the future in his younger guise of Superboy, and the New Gods, whose adventures spread into the pages of "Superman's Pal Jimmy Olsen." The stories in which Superman appears with those characters are classics. Probably the best Superman story, the one that encapsulates everything great about the Man of Steel, while also sending him to numerous, increasingly strange worlds, is Grant Morrison and Frank Quitely's "All-Star Superman." For a treatise on all that a man from the stars can mean to the planet Earth, one need look no further.

Often called "The Sentinel of the Spaceways," the Silver Surfer is one of Jack Kirby's later creations at Marvel Comics. The Surfer's first appearance as a secondary character in a Fantastic Four story so ignited the imagination of writer Stan Lee that the hero immediately grew into a character with a mythology and a philosophy all his own, one of the constant struggle between responsibility and morality in a universe where evil is often more necessary than good.

The Surfer was originally Norrin Radd, an astronomer from the planet Zenn-La. When Radd discovered that the cosmic entity known as Galactus had come to devour Zenn-La's very life force, Radd struck a deal with the primal being to seek out uninhabited planets that Galactus could consume. Eventually, Galactus became aware of Earth, and set out to make it his next meal. The Surfer arrived just in time to warn the Fantastic Four of Galactus' arrival, sparking a long history of camaraderie between the Surfer and the FF.

The Silver Surfer's adventures often center on philosophical conundrums as much as physical challenges, and writer Stan Lee has frequently used the Surfer as a vessel to express some of the writer's own metaphysical worldviews. Few stories showcase what the Surfer is all about better than his original appearances in Fantastic Four #48-50, and his subsequent solo series by Lee and John Buscema. Also of note is the Silver Surfer graphic novel, created by Lee and Kirby, which reunited the team that invented the character for one of the Surfer's greatest tales.

Though many characters have held the title of "Green Lantern," none is as iconic as Hal Jordan, a test pilot who found a dying alien in the wreckage of a crashed spaceship. The alien, Abin Sur, was a member of the Green Lantern Corps, an intergalactic police force that wielded strange power rings. In his dying moments, Abin Sur passed his ring on to Hal Jordan, drafting him into the Corps, and granting him the power to create anything his mind could envision, so long as he remains totally honest and completely fearless.

Many readers may recognize the concept of the Green Lantern from the ill-fated film starring Ryan Reynolds as Hal Jordan, but that movie failed to capture the essence of what makes Green Lantern great. A sense of wonder and adventure accompanies Hal Jordan on his travels through alien worlds and the deepest reaches of space, along with a sense of awe at his accomplishments, all of which are limited solely by his incredible force of will.

Hal Jordan has had many ups and downs as a character, even, at one time, betraying the Green Lantern Corps, and eventually giving his life in a redemptive act. As often happens in comics, he eventually returned to life in Geoff Johns' landmark mini-series "Green Lantern: Rebirth." This story refocused the character and set him on a path that he still follows in current stories. Johns still writes the continuing adventures of Hal Jordan, though the highlight of his run is undoubtedly "The Sinestro Corps War," wherein Green Lantern's greatest foe mounts an army possessing the power of fear itself.

While Alex Raymond created Flash Gordon to compete with Buck Rogers, another futuristic space hero, Flash's adventures took him farther, and to stranger places. The Earthling was transported to an alien world struggling against the rule of a powerful despot. Following an archetype influenced heavily by Edgar Rice Burroughs' John Carter of Mars, Flash became a hero to the world of Mongo, fighting alongside characters like Prince Vultan of the Hawkmen and Prince Barin, the displaced ruler of Mongo, to overthrow the terrifying Ming the Merciless.

Flash Gordon influenced a generation of science fiction, inspiring creators and characters galore. He also starred in a series of dynamite film serials, and, while it's camp can't be denied, the Flash Gordon film starring Sam Jones is great fun, and a fitting tribute to Alex Raymond's original strips. Latter-day takes on Flash Gordon have been less successful, including a SyFy Channel series that aimed to update the character, but failed to capture his charm.

When it comes to his print appearances, the best material is undoubtedly Alex Raymond's original comic strip, which has been reprinted enough times that it's easy to find, followed closely by Al Williamson's 1960s comics.

Though he's technically not a hero, at least no more than any villain is the hero of his own story, Thanos is one of Marvel's greatest and most compelling cosmic characters. Born on Titan, the Saturn's moon, Thanos was a powerful warrior who became obsessed with the concept of Death, and her physical embodiment.

In his quest to impress Death, Thanos embarked on various conquests, the most ambitious of which was the collection of the Infinity Gems, small jewels that held the power of the metaphysical forces of the universe. With the gems, and their absolute power, in hand, Thanos wiped out half of all life in the universe. It took a veritable army of Marvel's most powerful heroes to take Thanos down, and still he has returned, time and time again, to attempt his conquest of the universe.

There is no Thanos story more iconic than Jim Starlin, George Perez and Ron Lim's "Infinity Gauntlet." However, "The Thanos Imperative," which grew out of "Annihilation," and featured the death of Nova as he fought alongside a team of cosmic heroes called the Guardians of the Galaxy, is also well worth a read. Sharp-eyed moviegoers will also recognize Thanos from his brief cameo at the end of last summer's Avengers film. This set the stage for his probable appearance in Avengers 2, or a recently announced film featuring a version of the aforementioned Guardians of the Galaxy.