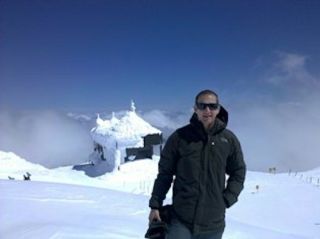 The parachuting thrill-seeker Felix Baumgartner is not the only living thing to plunge through the jet stream.

Recent studies have confirmed that microbes exist in the stratosphere,the atmospheric region between about 11 and 31 miles (18 and 50 kilometers) in altitude. (Baumgartner leaped into history from a balloon about 24 miles, or 39 km, above Earth's surface.)

Biologists had once thought this zone was uninhabitable due to its low pressure, high radiation and absence of water and nutrients.

"Life surviving at high altitudes challenges our notion of the biosphere boundary," said David Smith of the University of Washington in Seattle. [Extremophiles: World's Weirdest Life]

Smith is trying to take a more complete census of life in the stratosphere using mountaintop observatories and high-altitude balloons (although he admits being jealous of the lift capacity of Baumgartner’s balloon). With funding from the NASA Astrobiology Institute, he and his colleagues hope to say where these high-flyers come from, where they are going and what their evolutionary trajectory has been.

The research should provide insights into a class of hardy microorganisms that can survive at the fringes of what we Earthlings consider habitable, both here and elsewhere.

"The stratosphere is very similar to the surface of Mars," Smith said. "There is no better place on our planet to match Martian conditions, except inside environmental chambers."

The life forms adapted to sailing the high winds of Earth may give scientists clues on what to look for in the soils of Mars.

A hint of life in the air

Reports of life in the upper atmosphere go back as far as the 1930s. Studies conducted on samples collected on high-altitude balloon and rocket flights claimed to find microbes as high as 48 miles (77 km), but it’s uncertain whether the bugs really came from high up, or were the result of surface contamination.

"I am skeptical of the pioneering flights," Smith said. "Almost no controls for sterilization are reported in the papers." [Infographic: Earth's Atmosphere Top to Bottom]

Getting reliable samples from the upper atmosphere is difficult and expensive. Researchers must process huge volumes of air to catch a single microbe, since the estimated concentrations are only a few microbes per cubic meter. Smith believes the first solid evidence of life in the stratosphere was a 2002 balloon study, which collected viable cells at altitudes between 12 and 25 miles (20 and 41 km) above tropical India.

How microbes reach high altitudes is not entirely clear. A small group of researchers contend that the microbes could be coming down from space. But the organisms are more plausibly swept up in dust storms, hurricanes or other weather patterns, Smith said. Some microbes may even make the trip aboard commercial airplanes flying in the lower stratosphere.

The observed microbes do not appear to be actively growing at high altitude.

"Our best picture is that microbes are simply enduring the upper atmosphere," Smith says. "They are hitching a ride on prevailing winds until landing in a distant environment, sometime later."

Many of these globetrotters are spore-forming bacteria. When placed under stress, these bacteria shut down their metabolism and shrink down in size. They form a hard shell-like shield around their exterior, while turning on internal defense mechanisms against UV damage to DNA.

"One could argue that the spore is an adaptation that evolved, in part, because of airborne transport," Smith said.

If a spore can land in a hospitable environment (and if it hasn’t been damaged during its high-altitude voyage), it can reanimate itself. Researchers have typically relied on this reanimation to identify the organisms that use air travel. They place atmospheric samples in a nutrient-filled petri dish and then see what grows.

Smith thinks these "search and revive" missions have only scratched the surface of what is up there. "Only about 1 percent of microorganisms can actually be cultured in the laboratory," he said.

To see the beyond these one-percenters, Smith and his colleagues have begun using molecular-based techniques to identify biological material (both living and dead). Their atmospheric samples come from a "laboratory in the sky" at Mt. Bachelor Observatory in central Oregon, which rises 1.7 miles (2.7 km) above sea level. Smith says this altitude gives them reliable access to the upper troposphere, which is just below the stratosphere.

Instead of trying to grow organisms in a petri dish, Smith and his colleagues extract DNA that they can match to a genomic library containing 60,000 microbial taxa. Preliminary results have shown microbes from every major domain of life can be found in the upper troposphere.

The data from Mt. Bachelor will improve estimates of the concentration of microbes in the upper atmosphere. It should also give the first long-term observations on how microbial counts vary with season and other weather patterns.

In order to sample higher altitudes, Smith is also working with engineers from NASA's Kennedy Space Center on a balloon mission called MIST (Microorganisms in the Stratosphere).

"We still have no idea where to draw the altitude boundary of the biosphere," Smith said. Experiments like MIST will "address how long life can potentially remain in the stratosphere and what sorts of mutations it may inherit while aloft."

Those mutations could potentially act like tiny "seeds" that fall down randomly over the face of Earth and potentially take root in a favorable environment.

"It is conceivable — though difficult to prove — that the evolution of complex life on our planet is owed, in part, due to airborne transport," Smith said.