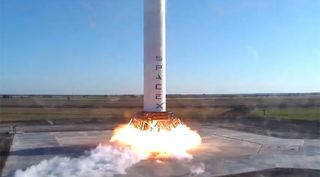 A reusable rocket prototype built by the private spaceflight company SpaceX has made its highest flight yet, a two-story test hop, as part of an ambitious project to develop completely reusable rockets and spaceships.

SpaceX's Grasshopper reusable rocket is a 10-story-tall test vehicle for vertical launch and landing, meaning rockets could not only lift straight up into the sky, but return down to Earth the same way, gently touching down on land when the mission is completed.

For Grasshopper's second test flight, the vehicle hopped nearly two stories (17.7 feet, or 5.4 meters), and then touched down safely on its launch pad. The test, which lasted 8 seconds, took place at SpaceX's rocket testing facility in McGregor, Tex., on Nov. 1.

No complete rocket has ever landed intact after launching to space.While NASA's space shuttle orbiters were reusable — the winged space planes glided back to Earth and landed on runways — the solid rocket boosters and external tank that helped them reach orbit were not fully recyclable.

SpaceX's first Grasshopper test flight occurred Sept. 21, when the vehicle made a 6-foot hop before landing safely on the ground. Another test jump is planned soon, to take the vehicle up 100 feet (33 meters) and back down.

"SpaceX believes that developing vehicles that are fully and rapidly reusable is a key element to radically reducing cost and increasing the efficiency of spaceflight," SpaceX spokeswoman Katherine Nelson told SPACE.com.

Ultimately, SpaceX envisions using three recyclable components to travel to space: a rocket first stage, a rocket second stage, and a cone-shaped space capsule. Each component would return separately to Earth and touch down safely on land to be refurbished for future missions. (Landing on land rather than at sea is preferable, because salt water makes it harder to reuse hardware).

SpaceX intends its capsule to use parachutes to cushion its landing, but the rocket stages will have engines to control their flights back down.