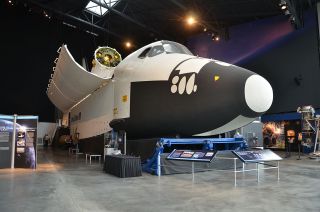 SEATTLE  — It's not every day you get to stand inside the payload bay of a space shuttle, but that's the experience now awaiting visitors at The Museum of Flight in Seattle.

Beginning Saturday (Nov. 10), guests to the museum's Charles Simonyi Space Gallery will come nose-to-nose with the Full Fuselage Trainer (FFT), a full-size shuttle mockup that was used for three decades by the more than 350 astronauts who flew on the now-retired orbiters.

"We do not miss an opportunity to tell people that this is the one thing every single space shuttle crew member had in common," Dan Hagedorn, senior curator at the Museum of Flight, told collectSPACE.com during a tour of the Full Fuselage Trainer.

Construction of the FFT, NASA's only full-length shuttle trainer, began in 1974 at Johnson Space Center in Houston. During its 35 years in service, it was used for a multitude of purposes, ranging from egress training to familiarizing astronauts with the lighting conditions in the 60-foot-long (18 meters) cargo bay. [Gallery: NASA's Space Shuttle Program in Pictures]

Now, with the shuttle program over and the space-flown orbiters delivered to museums, the FFT is about to start serving its new role: teaching the public about how NASA readied its crews for launch and how that experience will lead in the future to missions out into the solar system.

"It's sort of a clunky analogy, but the whole 'one small step for a man, one giant leap for mankind' — the astronauts individually prepared to go to space here [in the FFT], the shuttle has helped prepare mankind with the knowledge of what might take for longer steps into the solar system," exhibit developer Geoff Nunn said.

Made almost entirely out of plywood, the Full Fuselage Trainer wasn't designed to travel (though its nose section did once crash back to Earth when, decades ago, cranes being used in Houston to change its orientation failed and the mockup fell). For its move to Seattle, the trainer was segmented, shrink-wrapped and then shipped on NASA's bulbous Super Guppy cargo aircraft.

"I guess you could say it did fly once, on board the Super Guppy," Hagedorn said.

The FFT survived the trip with minimal damage, needing only a few paint touchups. But to make it more accessible for visitors, museum curators chose to replace its original aft section with a new build, gaining a theater and larger entry way to the payload bay in the process.

Following the opening ceremony on Saturday, guests will be able to ascend the trainer's new steps and tour through the open payload bay.

Looking up, visitors will see an engineering mockup of an Inertial Upper Stage (IUS), a rocket booster like the one used to thrust NASA's Galileo probe toward Jupiter after its launch on the space shuttle Atlantis in 1995.

Off the right wing — if the trainer had wings, which it doesn't — is suspended a half-scale but highly detailed model of the Hubble Space Telescope (complete with a spacewalking astronaut, also half-size). [The Most Amazing Hubble Discoveries]

At the front of the payload bay, guests can peer through the external airlock into the crew compartment's mid-deck, its storage lockers clearly in sight. An even better view of the interior awaits those who can venture inside — either in person or virtually.

"We'll have limited crew compartment tours offered by tour guide, which are going to be run through our educational department," Nunn said. "But for visitors who aren't able to get into the actual crew compartment, we have a set of wonderful VR tours."

Climbing into a space shuttle, even a mockup trainer, is not easy — especially if you have never done it before. It's much like trying to push a square (or at least long and lanky) peg through a round hole.

And that's just the first of the challenges of trying to tour museum guests — of multiple sizes — through the crew cabin of the Full Fuselage Trainer.

"We're going with NASA's height limit, so 6 foot, 4," Nunn said. "Children have to be ten years or older and always accompanied by an adult. There is going to be a dress code and obviously physical mobility requirements."

Once through the hatch, the space available is limited. Divided between upper and lower, or flight and mid-decks, the pressurized crew compartment was designed to take full advantage of the microgravity environment. Crammed into an area no bigger than the interior of a minivan are a wall of storage lockers, a food galley, bathroom, a cockpit, control panels and a sleeping area.

"The most recurring comment we get is, 'I didn't realize it was so small in there' when they go into the crew cabin," Hagedorn said. "That is almost always the first comment."

In Earth orbit, moving between the shuttle's floors required only pushing off of a wall and floating through one of two openings on either side of the cabin. On the ground, that almost effortless action requires a steep, vertical ladder (or in NASA-speak, the "inter-deck access aid").

And what goes up must come down.

That means that guests won't just need to be "this tall" to ride this ride; they also must be able to maneuver inside without hindrance. In trial runs with off-the-street visitors chosen by a lottery, adults and kids alike either recognized their own limits while climbing up or had regrets once they were already standing on the flight deck and were faced with descending a ladder they couldn't see.

"The first thing we learned is that we have to make sure people can negotiate the interior. If they have any kind of infirmities or disabilities of any kind, it's very problematic," said Hagedorn. [Where to See America's Greatest Spaceships (Infographic)]

Visitors' hesitations aren't the only concern, though. There is also the problem of those who feel too comfortable and view every switch, button and knob — of which there are many on both decks — as an invitation to flick, push and twist.

"We re-learned that people can't keep their hands off the thing," Hagedorn said. "It's pretty busy in there."

Plexiglas covers have been added to ward off wandering hands, but responsibility will fall to the tour guides, who will need to remind guests that the FFT is not just a hands-on exhibit but an artifact as well.

"We'll be walking that fine line between the museum's dual missions of preservation and education," Nunn said.

That dichotomy is illustrated by the one required change the museum had to make to the trainer: adding a sprinkler head to both decks in case of a fire.

"The only thing we had to modify — and even then we used existing holes — the fire marshal did require us to put in a sprinkler head into the crew compartment," Hagedorn said. "We did that, but it's unobtrusive and the only concession we made to the absolute accuracy of the artifact."

The museum hasn't yet worked out the final details of how access to the crew cabin will be offered, though it almost certainly will be through a premium tour of some sort. The museum's education department is looking at including the experience as part of a larger program they will offer about the shuttle program and training for space exploration.

Continue reading at collectSPACE.com about The Museum of Flight’s future plans for the Full Fuselage Trainer (FFT) and its “Spaceflight Academy” exhibit.